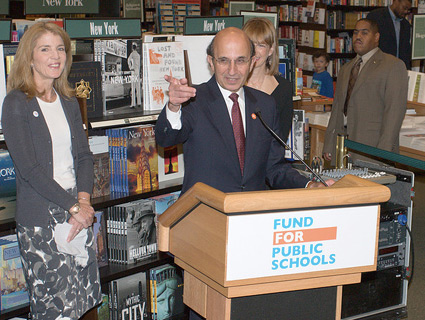 Former New York City school chancellor Joel Klein doesn’t seem to be especially happy to take questions these days about his unpopular employer, News Corp., the parent company of Fox News. Klein is in San Francisco today at an education reform conference sponsored by Jeb Bush and his nonprofit Excellence in Education, where he’s a member of the board. Klein’s boss, Rupert Murdoch, is slated to speak tomorrow morning, and his presence at the education event has caused quite a stir. The local teachers’ union is organizing a rally for this afternoon and more protests are expected tomorrow when Murdoch shows up.

While Klein may be here because of his ed credentials, he’s currently in charge of overseeing the internal investigation of News Corp.’s now-shuttered News of the World over the British phone-hacking scandal, and even accompanied Murdoch to his appearance before the British parliament. So Klein’s also here as a Murdoch guy, and the two roles aren’t meshing too well. I caught up with Klein in the swanky ballroom of the Palace Hotel, where he was milling around with state legislators and other ed reform types. I asked him how he felt about the fact that the presence of his boss was generating protests, and he was extremely prickly in response. “Whatever people want to protest they can protest. I’m here to talk about education,” he said.

Klein has been in the middle of minor scandal of his own involving News Corp. and its purchase of the education technology company Wireless Generation in 2010. Teachers unions had questioned whether Klein had signed off on sole-source contracts for the company while he was chancellor and then moved on to work for its parent company at News Corp., saying the deal that smacked of a revolving door between business and government. Parents also worried that a company owned by Murdoch might not protect the privacy of students. In late August, New York State cancelled a $27 million contract with Wireless Generation over concerns about its parent company. I asked Klein what was going to happen with the ed tech company given so many concerns about its association with the owner of Fox News. Again, he was testy. “Wireless will be fine,” he said, brushing me off, saying of the company, “Stay focused on the children and you’ll do fine.”