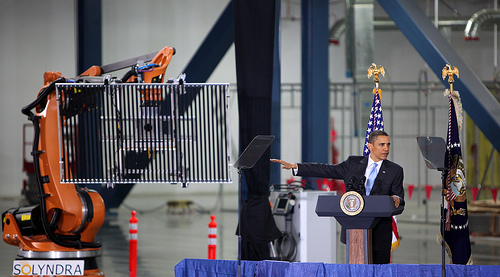 On Thursday, the House Energy and Commerce Committee voted along party lines to subpoena White House documents on Solyndra, the solar company that went under after receiving a $535 million federal loan guarantee.

It’s not out of the ordinary for Congress to subpoena documents. There were several attempts during the Bush administration to get a hold of documents related to controversial environmental decisions, but the administration blew them off. This subpoena, however, comes despite the fact that the Obama White House has already provided 85,000 pages of documents, and has been attempting to work with the committee.

As you can imagine, Democrats on the committee aren’t as enthused about this matter as House Republicans. Rep. Ed Markey (D-Mass.), a member of the committee, issued this statement Thursday morning that speaks pretty well to the situation. The rest is below the fold:

In my 35 years in Congress, I have presided over the issuance of only one subpoena in the time I served as a Committee Chairman. It, too, concerned an environmental policy matter that began during the Bush Administration. But unlike this subpoena for every single internal White House email related to Solyndra, the one I issued was issued on a bipartisan basis, with my Ranking Republican Member, Jim Sensenbrenner, fully supporting my efforts to learn more about the Bush Administration’s response to global warming.

It was a bipartisan effort because we exhausted all other avenues for obtaining the information from the Bush Administration first. That hasn’t happened here.

The Obama Administration has been cooperating with the Committee and has said it would continue to do so. The White House just yesterday offered to share internal White House emails on all the issues that are being debated about the Solyndra loan guarantee.

By contrast, what my subpoena requested was just two documents. One of these had been attached to a single email that EPA sent, but that the White House never even opened. The Bush Administration White House didn’t just refuse to provide them voluntarily – they refused to comply with the subpoena at all until the Select Committee scheduled a business meeting to consider a contempt motion.

This Committee should accept the accommodation offer the White House made. Subpoenas should be the last resort, used to obtain information when the subject of an inquiry has failed to fully cooperate.

In stark contrast to today’s zeal for issuing subpoenas to the White House, yesterday Republicans were singing a very different tune. Over in the Natural Resources Committee, Republicans voted unanimously against my motion to subpoena the CEOs of BP, Transocean, Halliburton and Cameron who refused – that’s right – refused – to appear at a hearing before the Committee.

We weren’t asking for hundreds of thousands of pages of emails or documents. We just wanted the opportunity to question them about the environmental catastrophe that actually was the result of illegal activity.

While insisting on full disclosure and complete transparency from the White House on Solyndra, Republicans have put the CEOs from the companies responsible for the worst offshore oil spill in our history into a witness protection program where they are apparently going to be immune from any Congressional or public scrutiny.

When it comes to solar energy, Republicans embrace the disinfecting power of sunlight and disclosure. When it comes to oil, they seem to prefer to hide behind its murky sheen.

This is not about using our subpoena power, this is about fossil fuel and nuclear interests wanting fewer Americans using solar power.