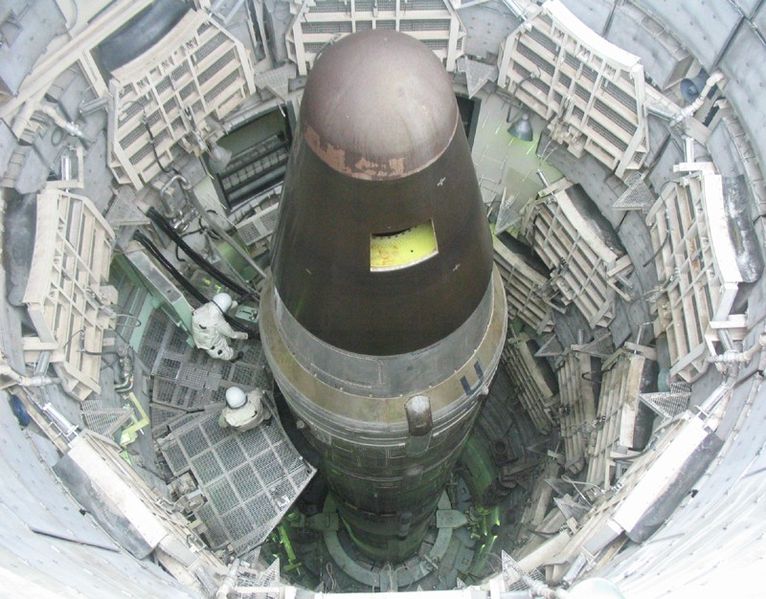 An ICBM loaded into a solo at the Titan Missile Museum in Tucson, Arizona.<a href="http://en.wikipedia.org/wiki/File:Tucson05_TitanICBM.jpg">Wikimedia</a>

Fear of new American military capabilities is spurring nuclear powers like Russia and China to modernize their atomic arsenals and evade disarmament, according to a new report from a US-British think tank.

Even though Barack Obama has pledged to work for global disarmament and the United States negotiated a new nuclear arms treaty with Russia, the world’s nine global states still possess 22,400 warheads and are moving swiftly to “modernize” their stockpiles, according to the study “Beyond the United Kingdom: Trends in Other Nuclear States” (PDF), by researchers at the British-American Security Information Council. “There is little sign in any of these nuclear armed states that a future without nuclear weapons is seriously being contemplated,” the authors conclude.

The report is part of a major push in Great Britain to reassess that country’s nuclear weapons program, but it’s chock full of data and analyses that show how the Nuclear Nine are expanding their capabilities, exploiting treaty loopholes, and heading for a possible 21st-century arms race.

Much of that effort is being spurred by US policy, the report notes: “[A]lthough the Obama administration deserves huge credit for kick-starting multilateral nuclear disarmament talks with Russia, it also appears true that the United States continues to view nuclear weapons as essential to national security and is planning, and spending, to ensure it has robust nuclear forces for many decades to come.”

Even those disarmament talks with Russia have yielded some hawkish conclusions among US defense planners. Last year, when Obama negotiated the New START treaty with his Russian counterpart, Dmitri Medvedev, both sides agreed to reduce their number of deployed, attack-ready nukes to 1,550. But there’s a massive loophole for jet bombers like the B-52 and stealthy B-2: Each jet only counts as having one deployed nuclear missile, no matter how many missiles and warheads it can stuff into its bomb bays and under its wings. As a result, the report states, “A force of 60 bombers loaded at their maximum capacity of 1,136 bombs and cruise missiles would only count as 60 weapons under New START.”

The United States is also developing new “dangerous and destabilising” military capabilities that have put Russia and China on guard. The Obama White House is continuing to explore “Star Wars”-style ballistic missile defense, as well as a Donald Rumsfeld-devised scheme called “Conventional Prompt Global Strike” that would put non-nuclear payloads on revamped intercontinental ballistic missiles, capable of hitting targets around the world at a moment’s notice. That latter program apparently has other nuclear nations’ leaders skittish:

The fear is that these weapons would give the U.S., in the midst of a serious crisis, a conventional first strike capability against Russian nuclear forces, and that the U.S. ballistic missile defence system would be able to deter or defend effectively against any Russian response. There is also a concern that Russia might not be able to distinguish between a conventional or nuclear ballistic missile launch against it, and might consequently mistake a conventional attack for a nuclear one and react accordingly, perhaps launching nuclear armed missiles of its own in response to a warning of an incoming missile attack.

As a result, Russia is justifying its nuclear modernization as a check to US powers. And it isn’t alone:

With the US embroiled in a major budget debate and defense dollars facing unprecedented scrutiny, the BASIC report could add weight to claims that America’s nuclear weapons program is too big for its own good.

Other fascinating facts from the report: