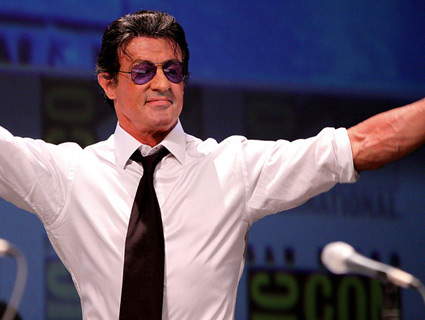 In 2011, the American people witnessed all kinds of previously unfathomable weirdness: For starters, we found out that small albino cyclops sharks really do exist. We saw the ex-CEO of Godfather’s Pizza actually become the front-runner in the 2012 Republican presidential field. The White House told us that an alien invasion was not imminent. And just this week MoJo senior editor Dave Gilson gave us a disturbing, childhood-ravaging mash-up of The Adventures of Tintin and Newt Gingrich.

After being through so much, we’re almost at the end of the year. 2011 can’t possibly get any weirder now, can it?

Sylvester Stallone is getting back in the ring with Rocky Balboa one more time — but not as a star. The actor is co-producing “Rocky: The Musical,” based on the Oscar-winning 1976 movie that launched his career.

The star appeared alongside his co-producers, the Ukranian boxing stars (and siblings) Wladimir and Vitali Klitschko, at a press event in Hamburg, Germany, where the musical is set to open in November 2012.

Inspired by the box office success of “Spider-Man: Turn Off the Dark,” and surely not intimidated by the troubles that musical encountered along the way, Stallone and company are reframing the underdog boxing tale as a love story between Rocky and Adrian…”Rocky” purists shouldn’t fear — hits from the films, including “Gonna Fly Now” and “Eye of the Tiger,” will be included in the show…The world champion Klitschko brothers will help train the performers in boxing maneuvers.

Let me get this straight: They are turning Rocky into a musical.

…is producing the show in Germany. I’m sure it’ll end up being the manliest, most steroid-cocktail-drenched musical play ever to grace the stage, but…a musical?

Is this real life? This isn’t an Onion headline? Does this mean we should expect The Expendables: The Musical to make its Broadway debut soon, too?

Stallone, famous for insane bodybuilding, his endorsement of fun, cancerous products in his films, and a popular action franchise that completely misses the point of its first movie, announced in March that he is also kicking off a new men’s brand clothing line inspired by the fashion sense of (you guessed it) Rocky Balboa. Perhaps the musical is just more of the same cross-promo.