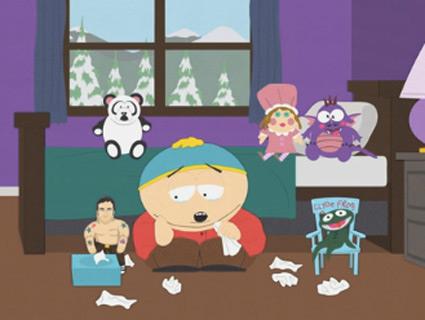 It was only a matter of time: South Park has something to say about Occupy Wall Street. On Wednesday night, Trey Parker and Matt Stone‘s Comedy Central series ran an episode titled “1%” that drew some topical humor and mild-to-moderate jabs from the ongoing #OWS protests sweeping the country.

The analogs are blatant: During a schoolwide President’s Challenge exam, the corpulent, Jew-baiting Eric Cartman tanks the fitness test. Because the student body’s evaluation is based on an average, Cartman’s performance severely slashes the score of the rest of the students, thus condemning everyone to gym class during recess. Cartman is unanimously dubbed the “1 percent” who is dragging down the other “99 percent.” Students unite to “fight the system” that’s rigged against them, while Cartman grumbles and loudly plays the victim.

To watch the full episode, click here. Here’s a clip:

Days before the episode aired, conservative pundits were already quivering with anticipation. Awaiting a harsh comedic takedown of #OWS, right-wing bloggers got all enthused: On RedState, “BigGator5” wrote about how “South Park [Actually] Took Down #OWS, YEARS AGO!” with their 2005 episode “Die Hippie, Die,” and how Cartman’s “only redeemable character trait is that he’s a capitalist.” On Andrew Breitbart’s Big Hollywood, “Hollywoodland” looked forward to the show’s “first, full-on commentary on the fledgling political movement” that would dole out the barbs fairly.

But many of these commentators, surely itching for a chance to confirm that the hip, politically incorrect Comedy Central satirists are on their side, smugly miss the point.

South Park does have what one could arguably call a libertarian streak. The show’s creators have a known history of inserting their characters into national political discussions, mocking both the left and right. But they have a soft spot for gleefully trashing left orthodoxies, from Hollywood’s limousine liberals to anti-tobacco campaigns. In 2001, Andrew Sullivan famously coined the term “South Park Republican,” and ostensibly right-leaning quotes attributed to Parker and Stone, such as “I hate conservatives, but I really fucking hate liberals,” only help to further the case for the series’ alleged anti-progressive bent.

However, “1%” simply doesn’t try to demolish #OWS in the way that Republican viewers would have wanted. Sadly for Erick Erickson, the 1 percent are depicted as the whiners, paranoid excuse-makers, and irrational Obama-blamers, not the 99. “I know how this works,” says Cartman after the other students had begun to gently criticize him. “You’re the 99 percent ganging up on the 1 percent…Jesus Christ! The 99 percent is totally ganging up on me!”

Later, as he whimpers to his beloved stuffed animal collection, his inanimate friends “tell” him that “It’s not your fault, Eric. How can they blame you for what is clearly President Obama’s fault?” (Because Obama supposedly invented “that stupid presidential fitness test.”) The next day, Cartman accuses children casually eating lunch of “occupying the cafeteria” and screams at them, “you think it’s wrong to be pissed off at a black president, so you’re all just pissed off at me! Well, go ahead, have your little rally to figure out how to stick it to the 1 percent. See what it gets you!”

The episode also targets police overreaction, the rabid media coverage of #OWS, and the panic over “class warfare.”

But those who were looking for any obvious pro- or anti-#OWS sentiment must’ve felt the same way lefty Simpsons viewers felt when they saw the decidedly apolitical episode on George H.W. Bush. “1%” stays true to South Park‘s patented formula: don’t ever commit the sin of taking politics too seriously, and just mine the big issues for crude silliness. For example, when Butters takes a half-hour bathroom break from what the mass media has labelled #OccupyRedRobin, a reporter announces that #OccupyRestroom is now in full swing.

In the end, petty debates over the animated show’s “true” political colors obscure the obvious point that the South Park team are in it to get the provocative, crude, and often contrarian laugh. For them, taking a political stand is at most a fleeting consideration. This applies no matter how you decide to interpret their Occupy-inspired episode.