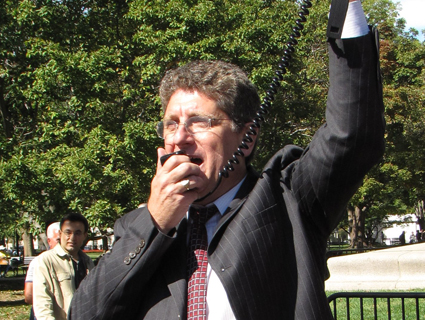 If you’re a resident of Iowa, Nebraska, Illinois, Missouri, or Minnesota, you’re on notice. Starting this week, Operation Rescue founder Randall Terry, who is currently challenging President Obama in the Democratic presidential primary, will begin airing graphic campaign ads featuring what purport to be aborted fetuses, during local news broadcasts.

As I reported last month, the ad buy is part of Terry’s nationwide strategy to take advantage of an FCC loophole barring censorship of campaign ads. Although networks and their local affiliates have the authority—and a legal imperative, in some cases—to block “indecent” material from the airwaves, there’s an exception when it comes to political spots, so long as they’re within 45 days of a primary or caucus.

The ad has multiple graphic images of babies murdered by abortion, and makes the argument that to vote for Obama knowing that Obama supports the murder of babies is a betrayal of the Catholic Faith.

Last year, following a successful trial run in a Washington, D.C. congressional race (for the non-voting “delegate” position), Terry announced plans to field single-issue congressional candidates in the nation’s 25 biggest media markets, for the sole purpose of running graphic anti-abortion spots that would otherwise never make it onto the airwaves. Terry’s already recruited candidates in Cincinnati, the Twin Cities, and St. Louis—and he himself is taking on Obama.

It sort of puts that controversy over Herman Cain’s smoking ad in perspective.