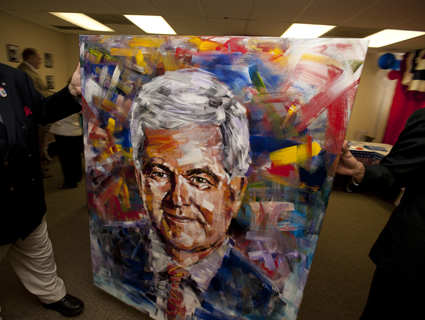 In November 1994, Gingrich balked at a $5 billion aid package for Bosnia, calling the conflict in Yugoslavia “a European problem” that should be resolved by America’s European allies. Just one month later, though, he’d had a change of heart. That December, Gingrich called for the complete removal of European peacekeepers, to be followed by a stepped-up American air presence leading up to a Bay of Pigs-style exile invasion (again with American air support). The idea, as reported by the New York Times’ Elaine Sciolino, was as follows:

Meanwhile, the United States would mount a covert operation to airlift part of the Bosnian Government Army to a friendly country such as Egypt, Israel or Morocco for training and arming by the Americans.

And Mr. Gingrich would do that even though, as he told the town meeting, “I don’t think the Bosnians are any angels either.”

“If they were winning, they’d be about as brutal as the Serbs.”

Gingrich’s reasoning was simple. Although he now considers the UN to be a “corrupt, inept, bureaucratic machine” that infringes on American sovereignty, Gingrich felt that the Serbs had disrepected the international body and needed to be taught a lesson. It was a dramatic reversal—one that made the conservative foreign policy establishment more than a little uneasy.

But at least Gingrich had an exit strategy. As he told Sciolino, “If they can’t win, we should surrender.”