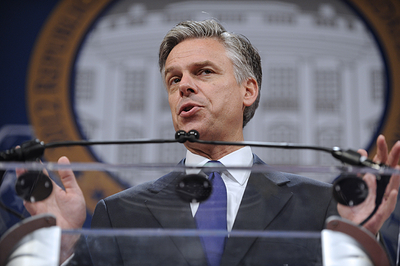 On Thursday night, Jon Huntsman made his 157th campaign stop in New Hampshire, at a National Guard armory turned rec center in the city of Newport. He noted this fact with the same ease and aplomb that he displayed when answering hours’ worth of questions lobbed at him by the audience. But Huntsman did bungle one question—and it was a telling one.

Near of the end of the event, Glenn Kaplan, 42, a cameraman and filmmaker, asked Huntsman if he supported the idea of “corporate personhood”—essentially, that Bank of America and Goldman Sachs have the same rights as people like you and I. “Will you support a constitutional amendment to end corporate personhood?” Kaplan asked.

“On corporate what?” Huntsman replied.

Huntsman looked uneasy. He said he’d only been asked this question once before: on the satirical Colbert Report. Then Huntsman gave his answer, which was, more or less: Mumble mumble…fix our broken tax policy…mumble mumble…revolving door…level the playing field…mumble mumble…thank you. He didn’t come with a cruise ship’s distance of answering Kaplan’s question. “It was a total cop-out,” Kaplan said afterward.

The belief that corporations are people is no small matter. You’ll remember in Iowa last fall Mitt Romney caused quite a stir when he said, “Corporations are people, my friend.” Democrats and progressives pounced on Romney’s remark as ammunition for their attacks on Romney as a candidate in corporate America’s pocket, a man bought and paid for by America’s 1 percenters. (It is true that 10 percent of America’s billionaires have given money to Romney’s campaign.)

In Newport, Kaplan specifically raised Romney’s belief that corporations are people when posing his question to Huntsman. And Kaplan’s mention of a constitutional amendment to roll back corporate personhood, which the Supreme Court furthered with its 2010 Citizens United decision, is especially timely. A coalition of good government groups and grassroots activists is ramping up efforts at the local and state level nationwide to demand that Congress pass legislation taming Citizens United. At the same, there are at least a half-dozen resolutions in Congress that would do just that. On the upcoming second anniversary of Citizens United, on January 20, a wave of events, including occupations of federal courts, are planned to demand an end to corporate personhood.

The fight against corporate personhood and Citizens United is shaping up to be the biggest fight in campaign finance. Jon Huntsman, it seems, can’t figure out whose side he’s on—Bank of America’s or yours.

[UPDATE]: At a Q-and-A Friday morning in Concord, the state capital, Huntsman clarified his position on corporate personhood. “Of course corporations are not people,” he said. “Who would say such an outlandish thing?”