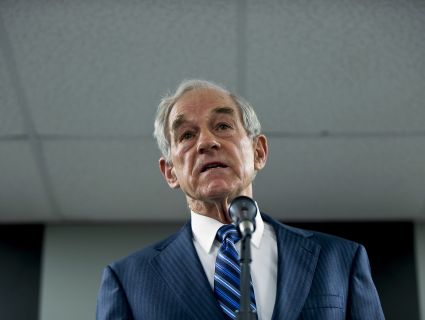 Bucking the turbulent highs and lows felt by his competition, Rep. Ron Paul (R-Texas), the libertarian’s favorite in the GOP presidential field, continues his slow and steady rise. The final poll before Iowa’s caucuses on Tuesday, released by the Des Moines Register on Saturday, showed Paul with 22 percent of support, just two percentage points behind front-runner Mitt Romney. Paul’s extensive field operation in Iowa and loyal supporters have set him up for a strong showing on Tuesday—a surprise victory even—that could rattle the fight for the nomination. There’s just one problem Paul can’t shake off: his newsletters.

Published as far back as the late 1970s, under various mastheads bearing Paul’s name (Ron Paul Political Report, Ron Paul’s Freedom Report, the Ron Paul Survival Report), the newsletters are, at times, virulently racist, homophobic, anti-Semitic, and conspiratorial. They dogged Paul’s 2008 campaign and threaten to do the same this time around, especially if the Texas congressman wins in Iowa. Paul and his staff’s scattershot responses to questions about the newsletters haven’t helped. Paul defended the newsletters in 1996, then said he didn’t write them in 2001. A campaign spokesman said in 2008 that Paul didn’t write “most of the incendiary stuff,” and last month, Paul personally disavowed them while pleading ignorance. “I never read that stuff; I was probably aware of it 10 years after it was written,” he told CNN. However, the newsletters, many of which The New Republic has published on its website after reporting extensively on them in 2008, variously list Paul as “editor” or “editor and publisher.”

Here are 10 of the most extreme statements found in Paul’s newsletters [emphasis added]:

From the Ron Paul Political Report, October 1992 (PDF), under the subtitle “Blast ‘Em?”:

“If you live in a major city, you’ve probably heard about the newest threat to your life and limb, and your family: carjacking.

“It’s the hip-hop thing to do among the urban youth who play unsuspecting whites like pianos. The youth simply walk up to a car they like, pull a gun, tell the family to get out, steal their jewelry and wallets, and take the car to wreck. Such actions have ballooned in recent months.

“What can you do? More and more Americans are carrying a gun in the car. An ex-cop I know advises that if you have to use a gun on a youth, you should leave the scene immediately, disposing of the wiped off gun as soon as possible. Such a gun cannot, of course, be registered to you, but one bought privately (through the classifieds, for example.)”

“At the recent world AIDS conference in Japan, researchers admitted what I have long told you: there is no prospect of a cure or vaccine for AIDS. For one thing, the virus keeps mutating. A drug that might work today won’t work tomorrow. Researchers also admitted that they had been lying about the incidence of heterosexual AIDS to increase funding for homosexual programs.

“Those who don’t commit sodomy, who don’t get a blood transfusion, and who don’t swap needles, are virtually assured of not getting AIDS unless they are deliberately infected by a malicious gay.”

From the Ron Paul Political Report, January 1988 (PDF), under the sub-title “AIDS: Something Else We Can Thank Government For?”:

“‘I have always said,’ notes Dr. Douglass [in Health Freedom News, an “anti-government medicine” publication], ‘and our forefathers told us this, that the greatest threat to the people is always government. Not foreign governments, but our own government.'”

“A mob of black demonstrators, led by the ‘Rev.’ Al Sharpton, occupied and closed the Statue of Liberty recently, demanding that New York be renamed Martin Luther King City ‘to reclaim it for our people.’

“Hmmm. I hate to agree with the Rev. Al, but maybe a name change is in order. Welfaria? Zooville? Rapetown? Dirtburg? Lazyopolis?

“But Al, the Statue of Liberty? Next time, hold that demonstration at a food stamp bureau or a crack house.”

“It was only a few days after the World Trade Center bombing before Mohammed A. Salameh was arrested. Is he guilty? Who knows? Some people think this a frameup by anti-Arab interests. Recall that shortly after the Kennedy assassination, Lee Harvey Oswald was apprehended and accusations were made. We’re still sorting that one out. From my point of view, it’s hard to believe the perpetrators could be as stupid as the authorities maintain.

We now know what one homemade bomb can do to a large city—one billion dollars of damage. Whether it was a setup by the Israeli Mossad, as a Jewish friend of mine suspects, or was truly a retaliation by the Islamic fundamentalists, matters little. The cities have become centers of violence, whether through the daily and routine terrorism of crime, political bomb terrorism, or the terrorism of mob behavior as in Los Angeles.”

“Order was only restored in LA when it came time for the blacks to pick up their welfare checks three days after rioting began…What if the checks had never arrived? No doubt the blacks would have fully privatized the welfare state through continued looting. But they were paid off and the violence subsided.”

“[O]pinion polls consistently show only about 5 percent of blacks have sensible political opinions, i.e. support the free market, individual liberty, and the end of welfare and affirmative action.”

“Given the inefficiencies of what DC laughingly calls the ‘criminal justice system,’ I think we can safely assume that 95 percent of the black males in that city are semi-criminal or entirely criminal…[W]e are constantly told that it is evil to be afraid of black men, [but] it is hardly irrational. Black men commit murders, rapes, robberies, muggings, and burglaries all out of proportion to their numbers.”

“The liberals want to keep white America from taking action against black crime and welfare…Jury verdicts, basketball games, and even music are enough to set off black rage, it seems.”

From Ron Paul newsletter solicitation, 1993 (PDF), in which Paul describes his political newsletter:

“I’ve been told not to talk, but these stooges don’t scare me. Threats or no threats, I’ve laid bare the coming race war in our big cities. The federal-homosexual cover-up on AIDS (my thinking as a physician helps me see through this one.) The Bohemian Grove—perverted, pagan playground of the powerful. Skull & Bones: the demonic fraternity that includes George Bush and leftist Senator John Kerry, Congress’s Mr. New Money. The Israeli lobby, which plays Congress like a cheap harmonica. And the Soviet-style ‘smartcard’ the Justice Department has in mind for you.”

“Next year, or next month, the New Money could wipe you out—destroy everything you’ve worked for and saved for—and leave your family destitute.

“It could happen any time. And I don’t mind telling you I’m scared. For myself, for my family, for my friends, for my country.

“We’ve seen a lot of financial tyrannies from Washington in this century. This one could take the cake. And popping out of the cake, with a big Surprise!, will be an IRS agent with an AK-47.”