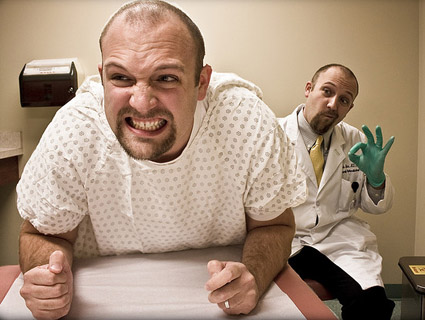 As Republican lawmakers have pushed ever more intrusive and expansive uterus-related legislation, some of their colleagues across the aisle have fired back with intentionally and equally ridiculous counterproposals. From mandatory rectal exams for guys seeking Viagra to prohibitions on sperm-stifling vasectomies, most of these male-only provisions have, unsurprisingly, flopped. But they’ve scored big as symbolic gestures, spotlighting the inherent sexism of laws that regulate only lady parts.

Some of the tongue-in-cheek ideas introduced across the country:

Delaware: By an 8 to 4 vote, the Wilmington, Delaware, city council recognized the personhood of semen because “each ‘egg person’ and each ‘sperm person’ should be deemed equal in the eyes of the government.”

Georgia: Responding to a Georgia house bill banning abortions after 20 weeks of pregnancy, Rep. Yasmin Neal wrote a bill outlawing most vasectomies because they leave “thousands of children…deprived of birth.“

Does Limbaugh think birth control pills work like Viagra? Plus: our handy calculator shows how much you’ll spend on birth control over a lifetime.

Ohio: A bill introduced by state Sen. Nina Turner would compel men to get psychological screenings before getting prescriptions for impotence meds. “We must advocate for the traditional family,” Turner said, “and ensure that all men using PDE-5 inhibitors are healthy, stable, and educated about their options—including celibacy as a viable life choice.“

Illinois: State Rep. Kelly Cassidy proposed requiring men seeking Viagra to watch a video showing the treatment for persistent erections, an occasional side effect of the little blue pill. As she explained, “It’s not a pretty procedure to watch.”

Missouri: Protesting the legislature’s vote to reject Obama’s contraception coverage mandate, nine female lawmakers cosponsored a bill restricting access to vasectomies except for men risking death or serious bodily harm. “In determining whether a vasectomy is necessary,” the bill reads, “no regard shall be made to the desire of a man to father children, his economic situation, his age, the number of children he is currently responsible for, or any danger to his wife or partner in the event a child is conceived.”

Oklahoma: When a zygote-personhood bill came before the state Senate, Sen. Constance Johnson penned an amendment declaring that ejaculating anywhere outside a woman’s vagina constitutes “an action against an unborn child.” Bonus: Johnson also suggested that any man who impregnates a woman without her permission should pay a $25,000 fine, support the child until age 21, and get a vasectomy, “in the spirit of shared responsibility.” In response to the same bill, state Sen. Jim Wilson proposed an amendment requiring the father of an unborn child to be financially responsible for its mother’s health care, housing, transportation, and nourishment during pregnancy.

Texas: Contesting a bill mandating sonograms before abortions, Rep. Harold Dutton unsuccessfully offered three amendments in a row. The first would have required the state to pay the college tuition of children born to women who decide against an abortion after seeing a required ultrasound image. The second would have subsidized the children’s health care costs until age 18. When that failed, he lowered the age to 6. That didn’t fly, either.