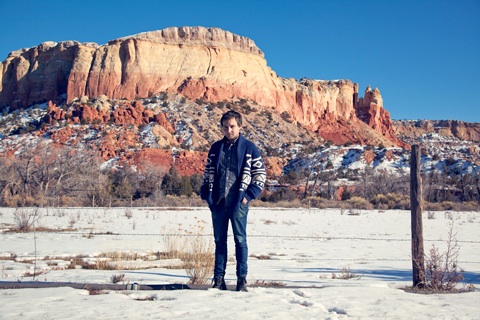 Los Angeles-born, Brooklyn-based Daniel Rossen is most commonly known as part of the harmonizing, alternatively morose and pop-y indie quartet Grizzly Bear, whose latest album Veckatimest (2009) was almost universally hailed as a ridiculous success. A self-described recluse, Rossen has admitted that he never shared his own music much beyond a close circle of friends before joining Grizzly Bear. Regardless, after having a good amount of time to hibernate after Veckatimest‘s debut, this week Rossen is releasing Silent Hour / Golden Mile, his first solo record to date.

Clocking in at a mere five tracks, the album is a tiny but satisfying taste of the distinctively Rossen side of Grizzly Bear’s creative efforts. In contrast to the band’s typical song progression of meandering vocals building up to a mid-song crash into a rhythmic, explosive chorus, Silent Hour / Golden Mile features Rossen singing solo, mostly to the accompaniment of his jangly, almost bluesy sounding guitar. The effect is more simplicity and looseness than we’re used to seeing from the young front man.

Highlights include “Silent Song,” the slamming, echoey second track, and “Golden Mile,” the finale—which alternates between roughly rhythmic and quietly gentle, and repeats the lullabyish lyrics “another silent hour / another golden mile” over a lightly crooning vocal track. Not to say there aren’t the expected dips into the morose—the heavily piano-laden “St Nothing” is not for the delicately disposed, and it’s probably the weakest point in an otherwise consistently good album.

Though hardcore Grizzly Bear fanatics may be hoping for something less sparse than Silent Hour / Golden Mile, the album’s overall effect is undeniably pleasing. Because it’s so short, and because Rossen is so reticent, it’s almost as if he’s allowed you to crash at his apartment for a night, slightly reluctant but secretly glad for a little company.