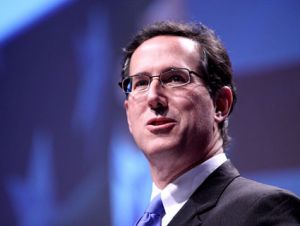 Last week, we reported that over a two-year period, GOP presidential hopeful Rick Santorum had run up nearly $100,000 in medical bills beyond what his private insurance paid for to care for his disabled daughter, Bella, who was born with the usually fatal genetic disorder Trisomy 18. On Sunday, Santorum acknowledged his insurance plan’s failings, and said that the bills were a huge burden for his family, though he did it in the context of explaining why his personal charitable contributions were so low. He told Fox News host Chris Wallace:

“I was in a situation where we have seven children, one disabled child who we take care of, and she’s very, very expensive,” he said. “We love her and cherish the opportunity to take care of her, but it’s an additional expense. We have to have around-the-clock care for her, and our insurance company doesn’t cover it, so I have to cover it.”

Wallace continued to hammer Santorum about his charitable contributions, but it would have been a perfect time to ask Santorum a more relevant question, which is: Given your huge medical expenses that aren’t covered by your good, private insurance plan, how, specifically, would the health care law you’ve vowed to repeal make your situation worse? And a follow-up: Isn’t it possible that Obamacare might save you a lot of money and make your life better?

These are questions Santorum still hasn’t answered, despite having told Glenn Beck recently that both he and his wife decided he should run for president specifically to kill President Obama’s health care reform bill. It’s unlikely that any of Santorum’s Republican opponents are going to raise the issue, but there’s another debate scheduled for March 19, sponsored by NPR, PBS and the Washington Times. Perhaps one of the moderators will take the opportunity to quiz Santorum about the huge disconnect between his own personal experience with the health care system and the policies he wants to push on the rest of us if he’s elected.