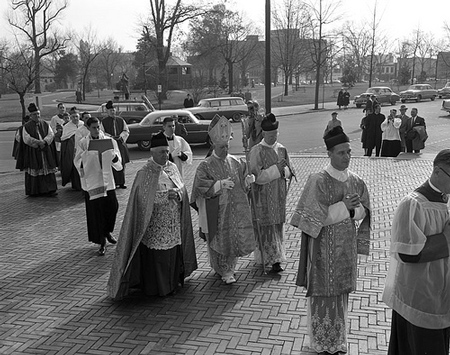 When the US Conference of Catholic Bishops declared war on the Obama administration on religious freedom grounds, the GOP was right there with them. Republicans cited the bishops’ complaints as they blasted the administration’s contraception mandate in health care reform, and gave the bishops a prominent platform on the Hill to air their grievances. When the Obama administration declined to award a new contract to the USCCB to serve clients of human trafficking, as it had been for the past five years, GOP members of Congress came out swinging.

In September, the bishops lost a $19 million contract to provide services to trafficking victims after refusing to make accommodations so that their clients could have access to a full range of reproductive health services. (Read this story from the latest print issue of Mother Jones for all the particulars.)  The lost contract was just one more piece of evidence the bishops invoked to prove that the Obama administration discriminates against religious groups and follows an “ABC—anybody but Catholics” policy, and House Republicans were happy to parrot that charge as well. Rep. Darrell Issa (R-Calif.) held a marathon hearing in December in which GOP members took ample time to accuse the administration of being anti-Catholic and to come to the defense of the bishops’ organization.

But even as GOPers have been piggybacking on the USCCB’s skirmish with the White House, they seem to have forgotten that the Catholic organization is hardly a Republican proxy. Even though they may align with Republicans on contraception, abortion, and gay rights, the bishops have traditionally been much more in sync with the Democrats. The bishops supported the nuclear freeze movement during the Reagan era, have consistently opposed the death penalty, and backed comprehensive immigration reform.

Despite some GOP claims that the Pope himself has said that the national debt is a moral hazard, the party leaders seem to have missed the part where the church has said that debt is bad because it hurts the poor. USCCB has been a leading advocate for debt relief in Third World countries because the bishops believe debt has to be relieved in a way to help the poor, not simply to placate bankers and rich people.

So Republicans seemed a little taken aback, when, in the midst of the USCCB’s showdown with the Obama administration (and women, including nuns), the group took aim at the GOP for backing draconian cuts to government programs for the poor. The source of the controversy dates back to a an interview House Budget Committee Chairman Rep. Paul Ryan (R-Wisc.) gave to the Christian Broadcasting Network earlier this month, in which he suggested that his Catholic faith had inspired him to draft a budget that takes an axe to social welfare programs:

Those principles are very, very important, and the preferential option for the poor, which is one of the primary tenants of Catholic social teaching, means don’t keep people poor, don’t make people dependent on government so that they stay stuck at their station in life, help people get out of poverty, out into a life of independence.

In response to these comments, as well the broader Ryan budget, the bishops have sent a series of letters to House GOP leaders criticizing the plan for the dire impact it would have on the poor and disadvantaged. Contrary to Ryan’s insistence that the budget is in keeping with Catholic tenets, the bishops insist that many of the budget choices are actually immoral.

Now that the bishops are taking on the House leadership, top GOP lawmakers, including House Speaker John Boehner (R-Ohio), have suddenly decided that the USCCB doesn’t really represent the church or all its bishops, and thus, they are free to ignore it. “These are not all the Catholic bishops, and we just respectfully disagree,” Ryan told Fox News last week. The argument didn’t fly so well with the USCCB, which shot back in The Hill that the group does, in fact, represent all the bishops.