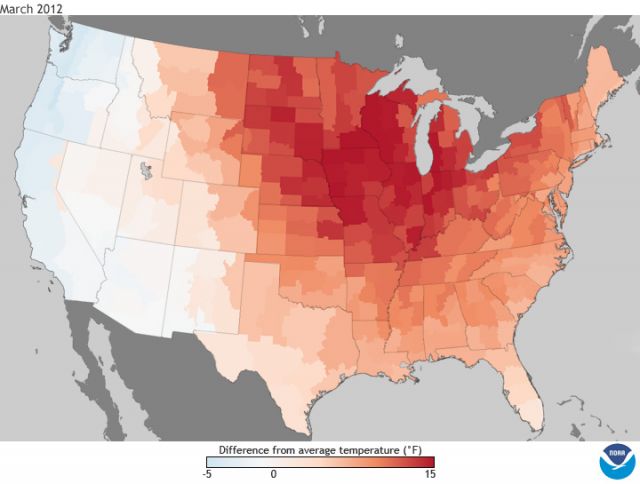 March was a whole new breed of insane for the record books according to NOAA’s State of the Climate report for the month.

First up, the mega tornado outbreak early in the month spawned 2012’s first billion-dollar disaster, as warmer-than-average conditions created a juicy environment for severe weather. There were 223 preliminary tornado reports in March, a month that averages 80 tornadoes. The majority occurred during the 2-3 March outbreak across the Ohio Valley and the Southeast. Forty people died and damages exceeded $1.5 billion. 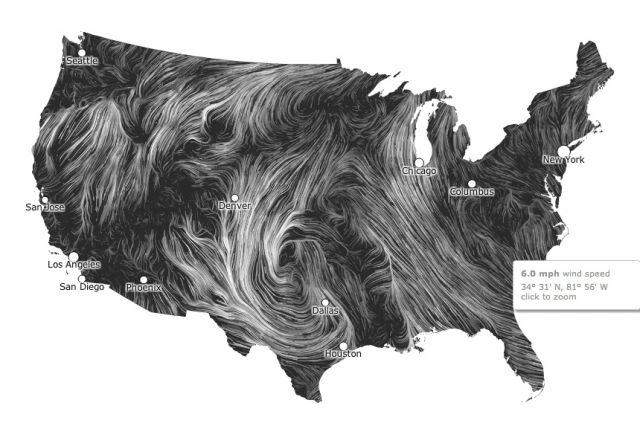 The March craziness was due to a persistent weather pattern that put a kink in the jet stream and kept cold away from the eastern two-thirds of the Lower 48. In the wind map above (click for amazing animation), you can see how this pattern formed a cut-off low: an atmospheric eddy, like an oxbow in a river, visible in the swirl of winds around Dallas.

Nature’s exuberant smashing of daily high temperature records in recent weeks can only be described as “Meteorological March Madness”. Conditions more fitting of June than March prevailed east of the Rocky Mountains since the start of the month. The numbers are stunning. Take, for example, the nine consecutive record high temperatures in Chicago from 14-22 March, eight of which saw the mercury eclipse 80°F. For those unfamiliar with the area’s climatology, high temperatures do not normally begin exceeding 80°F until after commencement of the Summer solstice. NOAA’s National Climate Data Center reported that over 7000 daily record high temperatures were broken over the U.S. from 1 March thru 27 March. With beachgoers flocking to the balmy shores of Hampton Beach, New Hampshire this week, one wonders if a new normal is emerging for the preferred destination of Spring-break revelers. 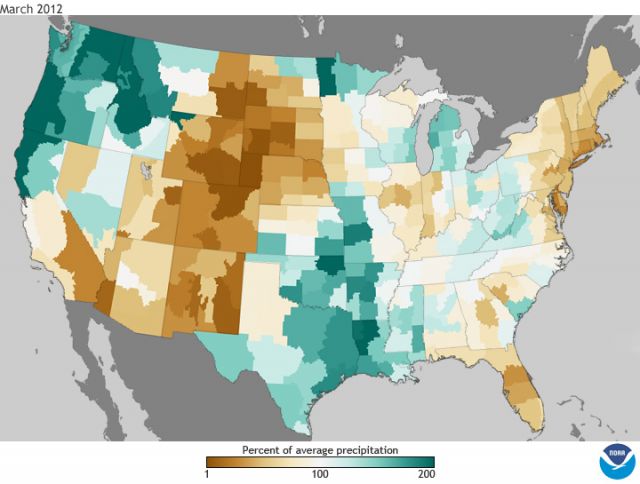 It wasn’t only about temperature either. Precipitation was anomalous throughout much of the country too, as you can see in the map above… really wet or really dry compared to the 1981-2010 average, with not a whole lot in between.

In fact the entirety of the so-called cold season that spanned October 2011 to March 2012 was whack. According to NOAA’s US Climate Extremes Index (USCEI)—which tracks the highest and lowest 10 percent of extremes in temperature, precipitation, drought, and tropical cyclones across the contiguous US—38 percent of the contiguous US racked up the second highest USCEI rank on record: