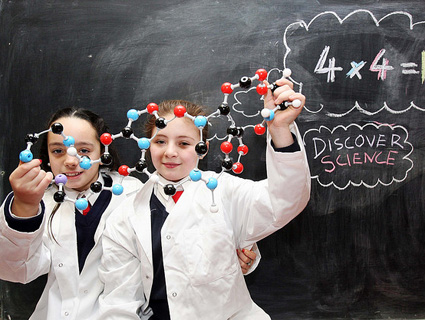 The state that once put John Scopes on trial for teaching about evolution is at it again: Yesterday, Tennessee legislators approved a bill that would allow public school teachers to challenge scientific consensus on issues like evolution and climate change under the guise of “academic freedom.” The bill directs administrators to create an environment that encourages students to “explore scientific questions, learn about scientific evidence, develop critical thinking skills, and respond appropriately and respectfully to differences of opinion about scientific subjects.” While it doesn’t require that teachers critique consensus views of evolution, climate change, and “the chemical origins of life,” it does allow teachers to introduce “alternative” theories, however baseless, without reproach, and makes state education standards fuzzier at the classroom level.

The bill’s sponsor, Republican Bo Watson, insists that the bill is just misunderstood, saying that it would allow students to bring up ideas they’d heard at home for discussion and charging that its opponents have “mischaracterized” it. But the Tennessee Science Teachers Association and American Civil Liberties Union say that’s just an excuse for a law that allows teachers to undermine scientific evidence for political and religious reasons. Said Hedy Weinberg of the Tennessee chapter of the ACLU in a statement released prior to the bill’s passage, such measures “seek to subvert scientific principle to religious ideology by granting legal cover to teachers who wish to dress up religious beliefs regarding evolution and the origin of life as pseudo-science and inject them into their science class curricula.” While Republican Governor Bill Haslam allowed the bill to become law, he did not sign it, saying that it would make science education standards less clear.

The Tennessee law is the latest sign that conservatives are seeking to link evolution and climate change in debates about science education, and attempting to make both into contested issues in the public sphere despite consensus among scientists. Louisiana is the only other state with a law that allows the teaching of “alternative” approaches to accepted scientific knowledge on evolution and climate change, but a number of states have introduced “Academic Freedom” laws, many of which are modeled on a template put forth by intelligent design boosters at the Discovery Institute. Back in February, leaked documents from the conservative-libertarian Heartland Institute described principals and teachers as global warming alarmists and suggested ways to get K-12 schools to adopt educational material critical of global warming.

There are signs of a backlash: In Louisiana, state Senator Karen Carter Peterson introduced a bill to repeal the state’s Science Education Act, which promotes “open and objective discussion” of scientific issues, specifically naming evolution, global warming, and human cloning. States like Iowa and New Hampshire have rejected “Academic Freedom” laws. Pro-science parents are trying to teach their kids about climate change at home. And scientists themselves are fighting back, demanding that scientific knowledge be accurately represented in classrooms.