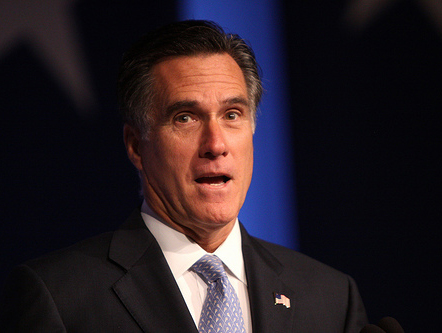 As governor of Massachusetts, Mitt Romney made a number of decisions that significantly limited the state’s ability to crack down on environmental crimes, according to the watchdog group Public Employees for Environmental Responsibility (PEER).

On Thursday, the group released a recap of Romney’s efforts to cut and reorganize the state’s enforcement agencies. His time as governor was marked by budget cuts, understaffed and underfunded agencies, and lax enforcement, PEER said.

Just weeks after taking office in 2003, he announced a plan to centralize the state’s legal services and lay off as many as half of its attorneys, including many within the Department of Environmental Protection. In rolling out the plan, Romney’s chief legal counsel Daniel Winslow singled out environmental positions as a target for cuts in an interview with Lawyers Weekly. Critics said the move would limit the state’s ability to prosecute environmental crimes, as the DEP was already “chronically understaffed” and would likely have to drop some cases. In the end, Romney’s reorganization plan was stymied by opposition from enviros, unions, and residents.

His administration also cut the DEP’s budget by almost a third, and temporarily closed its Northeastern Regional Office in Wilmington, Mass. An internal DEP memo that the Boston Globe obtained noted that these cuts were hurting the state. “Over the long term … these budget and staffing cuts cannot be sustained without significantly increasing risks to public health and the environment and increasing serious operational and service delivery problems for the agency,” it said.

In 2004, Romney’s administration was accused of suppressing a report that detailed problems within the Massachusetts Environmental Police (MEP), which enforces laws related to pollution, wildlife and marine safety. The report, which was conducted by the International Association of Fish and Wildlife Agencies, found that the police staffing was “inadequate,” the programs were “grossly under-funded,” and that the department had “weak leadership and management.” Just 105 of the 130 full-time posts were filled, and the pay for environmental enforcement officers was far lower than other law enforcement in the state.

PEER later conducted its own survey of MEP staff, and found that 97 percent of respondents felt that the police force was not sufficiently funded “to fulfill its environmental mission.” Ninety-nine percent felt it wasn’t sufficiently staffed. Nearly three-quarters disagreed with the statement that they had “confidence in the professionalism” of the MEP managers they report to. Staff confidence in the state’s enforcement agency was pretty abysmal.

New England PEER Director Kyla Bennett says this history is indicative of Romney’s disregard for enforcing the state’s environmental laws. “Romney’s approach to enforcement was to use it as a last resort, and to be as friendly to business as possible,” she said. “I shudder to think what it would be like if he implemented those policies nationwide.”