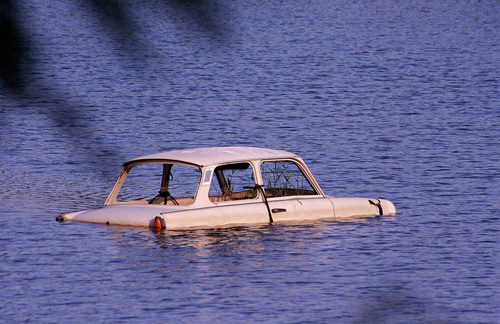 John Kleinheinz, who runs the hedge fund Kleinheinz Capital Partners, claimed the top spot among April donors to the pro-Romney super-PAC Restore Our Future, giving $1 million to the group. In a bizarre and colorful twist, Kleinheinz, as Politico reports, was once charged with “criminal mischief” for…driving another man’s car into a pond.

One day in 2006, a photographer named David Irvin was snapping pictures of Kleinheinz and his family at their home. An unhappy Kleinheinz believed Irvin was trespassing on his property while taking the photos—Irvin said he was actually on a nearby country club’s property. After vowing to the call the cops on Irvin, Kleinheinz got into the photographer’s rented Kia SUV, put it in gear, and then ducked out before the car plunged into a nearby pond. The stunt earned Kleinheinz a third-degree felony charge.

At the time, Kleinheinz told the [Fort Worth] Star-Telegram that he regretted the incident. “This was not an isolated incident, but it was regrettable,” Kleinheinz said.

Kleinheinz’s $1 million check made him the largest contributor to the super-PAC in April. He was a supporter of both Romney and John McCain’s presidential bids in the 2008 election and has been a long-time supporter of Republican politicians.

Kleinheinz did not respond to a request for comment. And Brittany Gross, a spokesman for Restore our Future also declined to comment. “We don’t comment on specific donors,” Gross said.