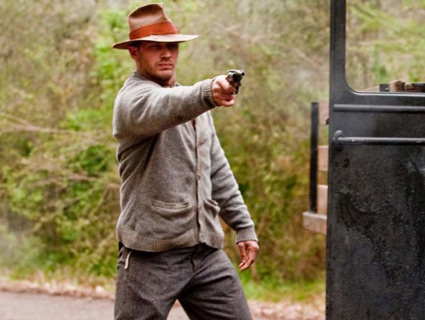 Courtesy of The Weinstein Company

There’s a movie out in theaters right now that stars Gary Oldman and Tom Hardy. Tom Hardy puts on a funny accent. There’s lots of killing throughout, and a quest for revenge and redemption.

It’s not The Dark Knight Rises.

The film is called Lawless. It competed for the Palme d’Or at the 2012 Cannes Film Festival, and is co-produced by Sean “Diddy/P. Diddy/Puff Daddy” Combs’ new company, Revolt Films. It’s also a bruisingly gorgeous gangster flick, with unexpected tenderness and shoot-’em-up verve.

Lawless is the second collaboration between Aussie director John Hillcoat (The Road) and equally Aussie screenwriter Nick Cave (yes, that Nick Cave), the first being 2005’s excellent The Proposition. Just as The Proposition transposed the more unforgiving aspects of the American Western to the colonial Australian outback, Lawless filters the genre’s style and aesthetic through Prohibition-era gangland.

Cave’s script is deftly adapted from Matt Bondurant’s The Wettest County in the World, a novel inspired by the true story of the Bondurant family’s bootlegger brothers in rural Franklin County, Virginia. Forrest (Hardy) is the tough-as-nails ringleader. Howard (Jason Clarke) is the brawn-over-brains enforcer. And Jack (Shia LaBeouf) is the youngest of the trio—the one with the least experience in killing and maiming, and the most to prove. The boys are legendary around town for the rumors and myth of their “invincibility.”

Their relatively peaceful moonshining operation is disrupted when corrupt government officials begin demanding their undue pound of flesh. So enters special deputy Charlie Rakes (Guy Pearce), a nihilistic lawmen from Chicago who makes a living off of hurting women, children, and men who are weaker than he is.

The turf war kicks into high gear from there. Amidst the torture-heavy bloodletting, the Bondurant tale unfolds with down-home charm, fine-tuned dialogue, and simmering tension. Throw in some country-blues covers of The Velvet Undergound, Gary Oldman as a Tommy-gun-toting mob legend, and a pair of smart, alluring love interests (played by the wonderful Jessica Chastain and the hugely promising Mia Wasikowska), and you have a late-August powder keg of a movie—and one of the year’s truly knock-out films.

There’s plenty to love about Lawless, which for my two cents currently stands as as the second best of 2012 (trailing only William Friedkin’s fiendishly good Killer Joe). It balances convincing romance with expertly staged stand-offs that would do Anthony Mann proud. Cave’s dialogue bristles with the same rhythm, wit, and black comedy of its writer’s post-punk band. The 1920s hill-country setting, imbued with a bracingly modern feel, makes fresh a story we’ve seen many times over. The acting is terrific, with Pearce, as casual sadism personified, routinely stealing the show.

After a summer of big movies and too many bigger disappointments (Dark Shadows, Rock of Ages, Snow White and the Huntsman, The Amazing Spider-Man, Chernobyl Diaries, and the Total Recall remake, for starters), it’s refreshing to see a smaller, riskier movie emerge from the creatively dead weeks of late-August as a badass drama.

It’s enough to make you wish that Nick Cave would ditch the alt-rock biz and forge a permanent alliance with Hillcoat, where they would spend the rest of their days making Westerns transplanted to unfamiliar terrain. (Leone, in the Maghreb in the 1960s. Peckinpah, in Soviet-occupied Afghanistan. Ford, against the backdrop of the Chinese Civil War. And so on, so forth.)

Now, a quick word on the most surprising thing about the movie: Shia LaBeouf is really, really good in it.

As someone who has struggled to appreciate the 26-year-old actor’s appeal (Indy 4, and Transformers Transformers Transformers), I was impressed by the fire and emotional range LaBeouf brought to the progressively cunning Jack. And his chemistry with Wasikowska (who plays the bewitching Dunkard member Bertha) is the gentle beating heart of the whole blood-bathed film.

The minor miracle of LaBeouf holding his own alongside the likes of Oldman, Hardy, Chastain, and Pearce is alone worth the price of admission.

Lawless gets a release on Wednesday, August 29. The film is rated R for strong bloody violence, language and some sexuality/nudity. Click here for local showtimes and tickets.