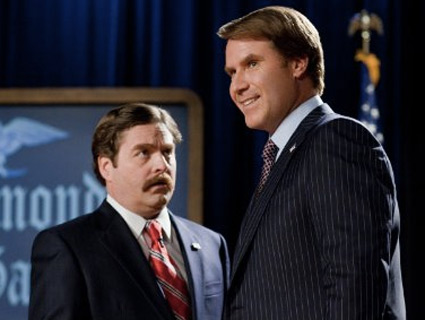 It’s sophomoric in its satire and cheap in its sight gags, but at its core, the new Will Ferrell comedy is an earnest endorsement of campaign finance reform.

“[In American elections], when you have the money, nothing is unpredictable,” Glen Motch boasts to a Chinese coconspirator.

So, the Motches call in sleazy campaign manager Tim Wattley (a smooth Dylan McDermott, in his first big comedic role) to mold the goofy Marty into a true country-club conservative. And thus begins the rowdy mudslinging, complete with charges of communism and Al Qaeda affiliation, wife-stealing, and a punched baby on a rope line (dubbed “baby-punch-gate” by Wolf Blitzer, Chris Matthews, and other cable news personalities making cameos).

The Campaign, produced by die-hard liberal writer/director Adam McKay, is a solidly funny delight, right up until a sputtering final act that gets too mushy for its own good. The last 15 minutes degenerates into a lefty revenge fantasy that is far more twee than it is crowd-pleasing, and the film’s message just isn’t as cleverly honed as those in some of McKay’s other politically tinged efforts (notably Anchorman, The Other Guys, and a lot of the stuff on FunnyOrDie.com).

But getting to watch hotshots Ferrell and Galifianakis act out an election-year dogfight is well worth the clean-up-Washington preachiness.

Also, for whatever it’s worth, Charles and David Koch actually seem to be pissed at this movie, or at least one of its stars: In an interview with the New York Daily News earlier this week, Galifianakis labeled the Koch Bros. as “creepy,” accusing them of anti-freedom nefariousness.

Last we checked, [The Campaign] is a comedy. Maybe more to the point is that it’s laughable to take political guidance or moral instruction from a guy who makes obscene gestures with a monkey on a bus in Bangkok.

And now, back to forgetting about real-world politics for a while. Here’s the theatrical trailer for The Campaign:

The Campaign gets a wide release on Friday, August 10. The film is rated R for crude sexual content, language and brief nudity. Click here for local showtimes and tickets.