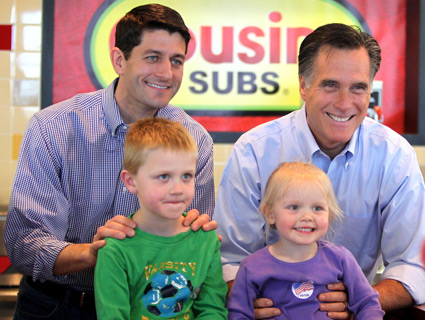 In a way, Paul Ryan is exactly whom President Barack Obama wanted on the Republican ticket with Mitt Romney. By selecting the Republican congressman from Wisconsin, whose name is synonymous with the GOP’s cut-taxes-for-the-rich and slash-programs-for-the-middle-class-and-the-poor, Romney has helped Obama in his No. 1 mission: shape the election not as a referendum on the sluggish economy but as a sharp clash between opposing sets of values and programs for the future.

Ever since the Democrats’ clock was cleaned by the tea party-ized Republicans in the 2010 midterm elections, Obama has pursued a grand political strategy of setting up his reelection contest as a choice between archly different visions. Long before Romney had vanquished the midgets of the GOP pack, Obama began using the Ryan budget proposal as his chief foil. In April 2011, he gave a speech at George Washington University that was a tongue-lashing of the Ryan’s budget plan, which would end Medicare as a guaranteed benefit and throw more tax breaks at the well-to-do than George W. Bush could imagine. Ryan, who attended the speech, was insulted and immediately blasted the president.

Throughout the 2011 battles over budget cuts (which nearly caused a government shutdown) and the debt ceiling limit (which nearly caused a financial crisis), Obama kept pointing to the Ryan budget as a plan that would cause hardship for many and reflected a pessimistic and Darwinian GOP vision of the future in which the United States could not afford to invest in education, infrastructure, and innovation—the ingredients necessary for a strong economy that would support a vibrant middle class. While the Republicans praised individual freedom and the powers of the market (which didn’t work too well in the run-up to the crash of 2008) and once again pressed the theology of supply-side tax cuts, Obama emphasized communal action, prudent investments, and responsible deficit-cutting.

The Ryan budget allowed Obama to do all that. Ryan’s presence on the ticket will do the same.

Now Romney owns the Ryan budget—and the Ryan view: Draconian government spending cuts that will subject Medicare and Medicaid recipients to the whims of the market (and eviscerate other government programs, such as food safety inspections, law enforcement, and environmental protection) and more post-tax dollars for 1 percenters.

The pick may grant Romney a moment of boldness. Ryan is white guy, but not a boring white guy with no message. He is a wonky evangelist of far-right economic policy. But this move will give Obama another line of attack on Romney—an assault that will consume plenty of political oxygen. Instead of talking about the economy, does Romney want to discuss the details of Ryan’s plan? Apparently, yes.

More important, this choice shows that Romney, the onetime moderate GOP governor of a blue state, is marching in lockstep with the tea party parade and has not only accepted but embraced his party’s lurch to the far end of the ideological spectrum. This is precisely the sort of behavior that Obama yearned for on the part of the Republicans.

The conventional wisdom is that veep candidates don’t matter. That’s largely true (with Sarah Palin perhaps a notable exception). Yet Romney’s tapping of Ryan—for what the Romney campaign calls “America’s Comeback Team“—provides the president the opportunity to bolster his different-vision message. Chicago cannot be unhappy about that.

UPDATE: On Saturday morning, Obama campaign manager Jim Messina blasted out an email responding to the Ryan VP pick. “This election is about values, and today Romney doubled down on his commitment to take our country back to the failed policies of the past,” the statement read.