Remember Mitt Romney’s Ohio campaign event, where a coal company forced a bunch of miners to take the day off and attend the rally without pay? Now Romney is featuring images of those miners in new TV ads (via Grist).

Of course, there seems to be no sense of irony in using images of men forced to take a day off work without pay to go to a rally in an ad claiming the Obama administration is taking away all the coal jobs. But Romney isn’t the only person getting himself in trouble for his appropriation of coal miners. Down in Kentucky’s 6th congressional district, Republican Andy Barr is also getting lambasted for a new ad that features Heath Lovell, a coal executive from western Kentucky, dressed up like a miner and accusing incumbent Democratic Rep. Ben Chandler of destroying the coal industry in Eastern Kentucky. Here’s the description, from the Lexington Herald-Leader:

In the ad, Lovell talks about the decline of coal trains in Ravenna in Estill County, which is in the 6th District. Lovell claims that Chandler, President Barack Obama and the federal Environmental Protection Agency “are destroying us.”

“They are putting the coal industry out of business, and it’s just devastating,” he says.

Lovell, who has contributed $2,500 to Republican Mitt Romney’s presidential campaign, said in an interview that the ad is not misleading.

“I still consider myself a coal miner,” he said. “I still go underground and keep up my training.”

But make no mistake; he’s no miner. The New York Times notes that Lovell and his wife have donated $21,400 to Republican candidates in the last two years, including Mitt Romney. His wife also recently posted this photo of Lovell making pizza with Romney at a fundraiser held in the home of Papa John’s Pizza’s founder on Facebook: 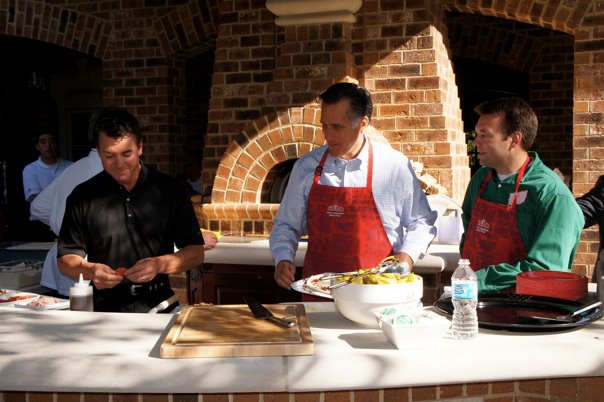