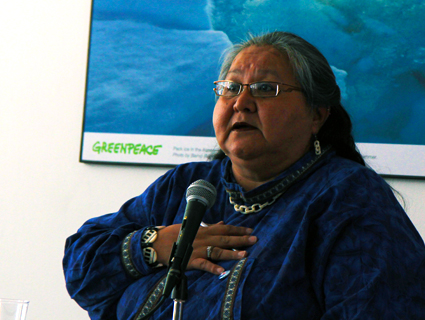 Caroline Cannon, an Inupiat from the Alaskan village of Point Hope, fears oil companies aren't prepared for the challenges of the Arctic. Tim McDonnell/Mother Jones

Caroline Cannon recalls walking onto the frozen Chukchi Sea with other women of her hometown of Point Hope, Alaska, and cooking hot lunches for the men out hunting at the ice’s edge for whales, seals, and walrus. It was a long-time tradition in this remote Inupiat village of 700 on the North Slope at the northwestern edge of the state. But the tradition came to an end three years ago, when the increasingly thin ice became too dangerous to traverse on foot.

“It’s a different thing when you have to cook in the village and transport the meals out into the ocean,” says Cannon, who won the 2012 Goldman Environmental Prize for her work opposing oil exploration in the Arctic. “We knew something was happening with climate change, but now it’s critical that we take it to heart.”

Just days after ice cover in the Arctic reached the lowest level ever recorded, Cannon flew to Manhattan this week to speak at a Greenpeace-hosted panel on why Arctic ice is disappearing at an astonishing rate, and what international governments ought to do about it. Also on hand were a few of the usual climate-beat suspects: NASA scientist James Hansen, 350.org founder Bill McKibben, TIME environment editor Bryan Walsh, and Greenpeace International Director Kumi Naidoo, who was among those who boarded and temporarily shut down a Russian oil rig in the Arctic last month.

Many of the panelists, audience members, and reporters present were familiar to one another, and chatted chummily over coffee and mini-muffins at a mid-morning cocktail party before the panel. It was a telling scene in light of later panel discussion on how the world of climate-change activism is too insular, creating what Hansen called a disconnect between “what scientists understand and what the public knows.”

Cannon was the exception, likely the only person in the room who’s gone mano-a-mano on her own home turf with disappearing permafrost and rising sea levels. Her main beef was with oil companies ready to exploit vast Arctic oil reserves before being adquately prepared to handle a potential spill. She pointed to the fact that Shell closed its new Arctic shop early for the winter after less than a month of drilling as evidence that the company doesn’t yet have the infrastructure in place to cope with the high seas, shifting icebergs, and brutal winds of the Arctic.

While environmental policy wonks, journalists, and scientists hash out the finer points of computer glacier modeling, carbon pricing programs, and renewable energy subsidies, Cannon is heading home to a more immediate issue: What to do with a freshly hunted whale now that the old ice cellar has melted away?

“It takes like fifty refrigerators to keep a whale!” she laments. “Our people rely on that ocean. And we’ve seen some dramatic changes.”