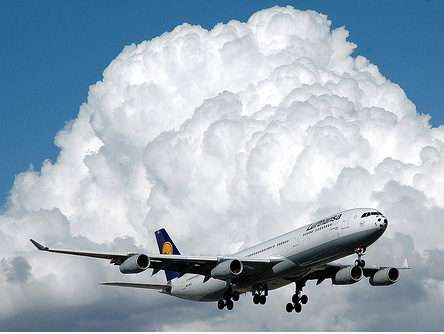 The Senate voted unanimously over the weekend to block US airlines from participating in a carbon offset program for flights into and out of Europe. This might be the first issue in the past few years that enjoyed consensus support between the Senate and House, with agreement among both Republicans and Democrats. Too bad the consensus came on a measure to block the European Union’s efforts to do something about climate-changing emissions.

Since January, the European Union has insisted that airlines pay for carbon offsets for all international flights. Aviation emissions are huge—a roundtrip flight between London and New York creates “roughly the same level of emissions as the average person in the EU does by heating their home for a whole year,” according to the European Commission. And with more people flying on gas-guzzling aircraft than ever before, the International Civil Aviation Organization (ICAO) estimates that emissions from planes will increase 300 to 700 percent by 2050.

The cost of the program would have been transferred to the ticket-buyer, with the total bill for your ticket coming in a few dollars higher than it would have been otherwise. And if you can afford an expensive international trip, chances are you can afford a few extra bucks to pay for your emissions. That is, if you had even noticed the fee; given all the other taxes when you fly to Europe these days, the line item might not even have caught your eye.

But with the vote on Saturday, the Senate joined the House in blocking US airlines from participating in the program. From Reuters:

Republican Senator John Thune, a sponsor of the measure, said it sent a “strong message” to the EU that it cannot impose taxes on the United States.

“The Senate’s action today will help ensure that U.S. air carriers and passengers will not be paying down European debt through this illegal tax and can instead be investing in creating jobs and stimulating our own economy,” Thune said in a statement.

Democratic Senator Claire McCaskill, the measure’s other chief sponsor, said, “It’s refreshing to see strong, bipartisan support for the commonsense notion that Americans shouldn’t be forced to pay a European tax when flying in U.S. airspace.”

Environmental groups are urging President Obama to veto the bill. But the State Department and the Department of Transportation are already on record opposing the EU’s plan, so it seems likely that Obama will approve the new bill as well.

The bill states that the Secretary of Transportation could “reconsider the prohibition if the EU trading scheme is amended, an international alternative is agreed to, or the United States implements its own program to address aviation emissions.” But the US doesn’t seem likely to agree to either a domestic or international tax on aviation carbon anytime soon.