Back in June 2009, the US Global Change Research Program (USGCRP) released a detailed 188-page report, “Global Climate Change Impacts in the United States,” showing how climate change would affect different regions of the country. The USGCRP is at work on its next assessment right now, which is due out in 2013. But this week a climate-change-denying think tank is trying to muddy the water by releasing what it calls an “addendum” to the USGCRP report.

The Cato Institute, a “free-market” minded think-tank based in DC, plans to release its own “Addendum: Global Climate Change Impacts in the United States” report. In addition to the title, the report’s cover looks like the USGCRP report: 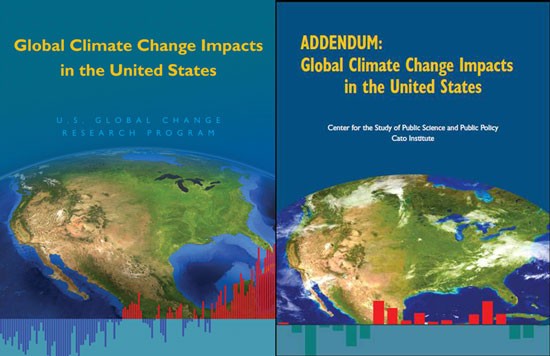 The Daily Climate flagged the fake report on Monday, noting that the addendum “matches the layout and design of the original, published by the U.S. Global Change Research Program: Cover art, ‘key message’ sections, table of contents are all virtually identical, down to the chapter heads, fonts and footnotes.”

While the real USGCRP report had grim predictions for many regions of the US, the Cato report claims that “observed impacts of climate change have little national significance.” A draft version of the Cato report is posted online. It lists noted climate contrarian and Cato senior fellow Pat Michaels as the editor in chief.

Rick Piltz, who was a senior associate with the USGCRP for ten years before leaving amid Bush-era censorship in 2005, also covered the Cato draft on his blog, Climate Science Watch:

Because of its misleading design and layout throughout, the Cato report can be characterized as a counterfeit, having nothing to do with the USGCRP or the authors of the original report. It was not subjected to the extensive review process that characterized the 2009 report, and its key findings are neither consistent with the original assessment nor with the analysis developed by the great majority of qualified scientists.

UPDATE: Eleven members of the Federal Advisory Committee that wrote the 2009 USGCRP report have released a statement condemning the Cato report as “deceptive and misleading.”