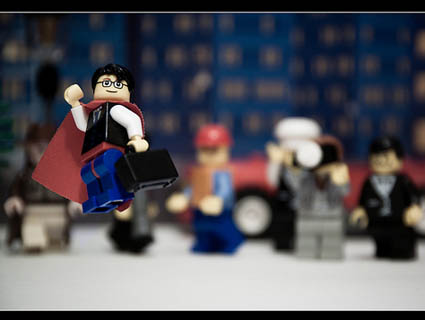 A confesson: I’m basically a Superman stan, since I was a child, and when I started working as a journalist, I’d joke to people that as a kid I had always wanted to be Superman, but now that I was grown up I wanted to be more like Clark Kent.

As someone who came to professional journalism through blogging, I was excited to see that DC Comics, as part of its reboot of the DC universe, is recasting Clark Kent as a disillusioned reporter who quits the Daily Planet to become a blogger after becoming disgusted with a corporate takeover of the Metropolis Daily Planet. DC has increasingly incorporated elements of print journalism’s decline into its products (in the animated feature Justice League: Doom, Superman literally tries to talk an aging laid off reporter out of throwing himself off the roof of the Daily Planet), but I didn’t expect DC to take the story this far. According to a USA Today interview with writer Scott Lobdell, Superman leaves to start “the next Huffington Post or Drudge Report.”

“I don’t think he’s going to be filling out an application anywhere,” the writer says. “He is more likely to start the next Huffington Post or the next Drudge Report than he is to go find someone else to get assignments or draw a paycheck from.”

Drudge and Huffington Post are actually very different entities. The former is today a right-wing aggregator whose primary objective is shaping the coverage of national news outlets, while the latter aggregates but also runs an extensive news-gathering operation whose reporters regularly scoop their more august rivals. There was a time when mainstream media referred to blogs derisively. But now that the medium is professionalized most understand that blogging is form, not content, and that good reporting is good reporting whether it’s done by a website or by a nightly news broadcast. The “upstart” veneer to news blogging is largely gone—it’s now something professional writers are simply expected to know how to do.

How well Superman’s writers understand that will determine the longevity and effectiveness of this latest change. For it to be something more than a timestamped gimmick, Clark Kent’s motivations for being a reporter have to stay essentially the same: Journalism in the public interest is just another way that Superman tries to save the world.