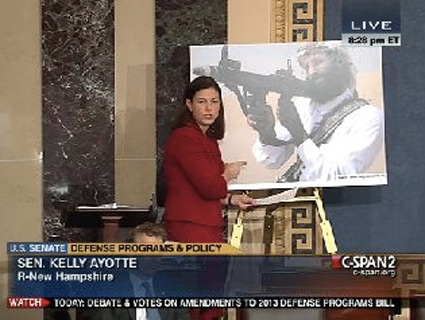 “If you don’t have a right to trial by jury, you do not have due process,” Sen. Rand Paul (R-Ky.) said as he urged passage of Senator Dianne Feinstein’s (D-Calif.) amendment blocking indefinite detention of US citizens and legal residents captured on US soil Tuesday night. “You do not have a Constitution. For goodness’ sakes, the trial by jury has been a long-standing and ancient and noble right. For goodness’ sakes, let’s not scrap it now.”

The Senate seemed to have concurred as it passed Feinstein’s amendment in a 67-29 vote, with mostly Republicans voting no. After a year of trying, Feinstein had gotten her colleagues to agree that any American apprehended on US soil should have the right to a trial.

Or had she? Consider this: Senators Carl Levin (D-Mich.), Lindsey Graham (R-S.C.) voted for the Feinstein amendment, though they were among the most vocal supporters of indefinite military detention for US citizens in the past. According to their floor speeches, the Feinstein amendment actually legalizes indefinite detention rather than blocking it.

The question of what the Senate actually did hinges on language in the amendment that reads: “An authorization to use military force, a declaration of war, or any similar authority shall not authorize the detention without charge or trial of a citizen or lawful permanent resident of the United States apprehended in the United States unless an Act of Congress expressly authorizes such detention” (emphasis mine). It’s that “unless” that the supporters of indefinite detention latched onto.

“Senator Feinstein’s amendment…does not prohibit military detention if it is expressly authorized by law,” said Levin, “which I read as a statute authorizing the use of military force itself or some other act of Congress.” Since Congress did authorize the use of military force against Al Qaeda in 2001, Levin argued, Feinstein’s amendment expressly allows military detention without trial of US citizens, even if captured on US soil. (An opponent of indefinite detention, Rep. Justin Amash (R-Mich.), actually had a similar interpretation.)

“That was strange indeed,” said Raha Wala of Human Rights First, who isn’t buying Levin’s interpretation despite having opposed the Feinstein amendment because it didn’t protect all persons in the United States. “I don’t think that argument works.”

Levin’s Republican allies seemed to think otherwise. Ayotte, delivering her remarks in front of a large poster of the US-born radical Anwar al-Awlaki holding a bazooka, said she agreed with Levin’s interpretation (though she did vote against the amendment). “I wanted to add my support for [Levin’s] interpretation of the current Feinstein language,” Ayotte said. “Would we want to tell a member of someone who had committed an act like 9/11 against us, an act of war against our country, the first thing they hear is you have the right to remain silent?” Ayotte asked, perhaps unaware a French national named Zacarias Moussaoui was tried and convicted in federal court for his part in the 9/11 attacks without ever being held in military detention. Graham also called Levin’s take “incredibly sound.”

Feinstein spoke shortly after Levin, Graham, and Ayotte. She thanked the chamber for a spirited debate, particularly Graham, for expressing himself “in a very spicy way.” But Feinstein said that the Levin interpretation was incorrect, and that based on a federal court decision in the case of Jose Padilla (the only American accused of terrorism to be held in military detention in the US) the 2001 AUMF doesn’t count as an authorization to detain US citizens captured on American soil indefinitely.

One thing might explain Levin, Graham, and Ayotte’s insistence that Feinstein doesn’t understand what her own amendment does: They may be hoping that if an American citizen apprehended on US soil is detained without trial, and that detention is challenged in court, judges will take their remarks as evidence of Congress’ true “legislative intent” and decide that the law does authorize domestic indefinite detention. Ironically, conservatives generally frown on that kind of legal interpretation.

That seems like a long shot, however, which means that despite the flaws of the Feinstein amendment, if it makes it into law, it may mark one of the few times since 9/11 that Congress has acted to protect the due process rights of American citizens rather than narrowing them.