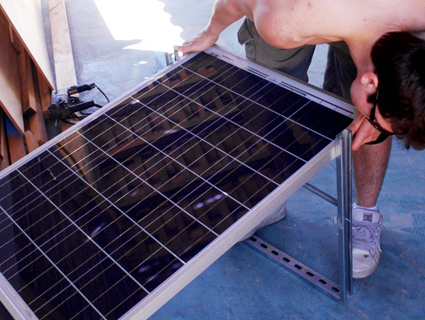 A bit of good news for fans of renewable energy: Driven by a steady decline in the cost of manufacturing solar panels, the cost of going solar in your home or business is the lowest its ever been, according to a new analysis of project data by the Lawrence Berkeley National Laboratory. Total installation prices fell 11-14 percent from 2010 to 2011, depending on size, continuing the downward trend of the last decade, which analysts predict will carry forward into 2012:

The study looked at some 150,000 systems installed since 1998 in search of concrete proof to bolster the “quite a bit of anecdotal evidence along the way that prices were falling,” said author Galen Barbose. Tech advances and exploding demand have pushed down the cost of the solar modules themselves, the main factor in the overall drop. But Barbose cautioned that that drop could level out if prices for the ancillary aspects of installing solar stay high relative to the cost of the physical panels. That includes permit fees, installation labor, power inverters, and marketing and overhead costs for installation companies.

“There are limits to how much further module prices can drop,” he said, and pointed to Germany as an example of a place where hardware costs are comparable to the US, but easier and cheaper permitting practices cut the overall cost for household installations nearly in half. “‘Soft’ costs could come down significantly in the US, but to really make an impact on a national scale there will need to be efforts on the federal level to spur changes that aren’t happening locally.”

In other words, solar is in the same boat as wind: Big-time growth will be a pipe dream until the feds can chart a detailed course for renewables.