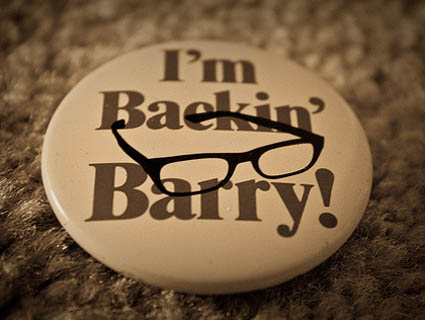 Political reporters love the concept of political “mandates” even though political scientists are skeptical that mandates even exist. On Sunday, Politico‘s Jim VandeHei and Mike Allen penned the latest entry in this genre, arguing that Barack Obama, if he wins, won’t have a mandate because he won’t have won a majority of white voters:

If President Barack Obama wins, he will be the popular choice of Hispanics, African-Americans, single women and highly educated urban whites. That’s what the polling has consistently shown in the final days of the campaign. It looks more likely than not that he will lose independents, and it’s possible he will get a lower percentage of white voters than George W. Bush got of Hispanic voters in 2000.

A broad mandate this is not.

This pseudo-Buchananite argument—that the white vote is important for symbolic and totemic purposes beyond the actual tally—is a favorite of the political press. At best, VandeHei and Allen are regurgitating the Republican argument that there are “real Americans” who vote Republican and then there is everyone else. The converse argument—that the Republican Party’s overwhelming reliance on white votes while the Democrats represent a broader cross-section of the country means that the GOP would lack a mandate—is rarely made. When VandeHei and Allen address the GOP’s growing demographic problem, it’s merely a matter of numbers and winning elections. They do not question whether a party whose supporters are 91 percent white would have a mandate to govern an increasingly diverse nation.

VandeHei and Allen’s delegitimization of nonwhite voters is reprehensible in and of itself, but it’s also historically illiterate. Race may affect perceptions of Barack Obama, but Democrats began having a white voter problem decades ago. In 1964, Johnson carried nonwhites by Barack Obama-like margins because his opponent Barry Goldwater, though not himself a racist, made common cause with white supremacists.

Johnson memorably declared after signing the 1964 Civil Rights Act that “we have lost the South for a generation,” which in hindsight was less prophetic than optimistic. Johnson’s prophecy, however, helps shed light on the details of the Democrats’ “white voter problem,” details that VandeHei and Allen ignore. When you look at the white working-class vote by region, for example, Democrats remain competitive everywhere but in the South, where they get crushed.

So it’s not simply that VandeHei and Allen are positing that only a majority of white voters can deliver a mandate for a president. It’s that they’ve unwittingly given a specific subset of white voters in the states of the old Confederacy—the same states that once attempted to secede from the Union in order to preserve their authority to buy and sell human beings and that dumped the Democratic Party over its repeal of American apartheid—a veto on the ability of the first black president to enact his agenda. The last few decades have seen dramatic changes in the South, but the past still matters.