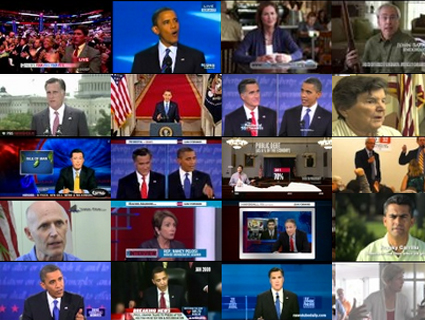 Already nostalgic for the campaign that was? Or just looking for a way to pass the time while you white-knuckle your way to the results? Help is here: We’ve put together video roundups of the high and low points of the campaign on 10 major issues, introduced by Mother Jones reporters who have covered the issues extensively. There’s certainly much more to this election than what lies within these lists. But it may serve as a good time capsule and maybe even help a handful of undecided voters finally…decide.

President Barack Obama and Mitt Romney refused to say the “C-Word” in the debates, but after Hurricane Sandy, it was on everyone’s minds—including New York City Mayor Michael Bloomberg’s. Last week he endorsed Obama on the basis that the president has better policies to stop climate change. Kate Sheppard discusses:

1) Romney at the GOP convention.
2) Obama at the Democratic convention.
3) Bill McKibben of 350.org, supporting Michigan’s Proposal 3, which would require electric utilities to derive at least 25 percent of their electricity from renewables by 2025.
4) Climate Desk’s coverage of damage caused by Hurricane Sandy to Staten Island, New York.
5) Climate Desk’s coverage of 2012’s historic drought.

From Montana’s “weird and wild” Senate race between Sen. Jon Tester and Rep. Denny Rehberg to campaign ads that prominently feature guns—at least this year’s congressional races haven’t been boring. Tim Murphy breaks down some of 2012’s most colorful races:

Andy Kroll calls 2012 “The Dark-Money Elections”—elections that has featured an unprecedented amount of anonymous, untraceable cash. He explains:

1) A trailer for Hillary: The Movie, the documentary that launched the Citizens United Supreme Court case and gave rise to super-PACs.
2) A Citizens United explainer by StoryOfStuff.org.
3) PublicIntegrity.org asks people on the street if they’re familiar with super-PACs.
4) A silent ad paid for by the unPAC coalition.
5) Mother Jones co-editors Clara Jeffery and Monika Bauerlein discuss dark money with Bill Moyers.

Both of the presidential candidates have promised to pull the US economy out of its slump. Can they do it? Washington Bureau Chief David Corn weighs in.

When it comes to counterterrorism and foreign policy issues, Obama and Romney often agree. Adam Serwer parses their positions:

1. Romney says he supports Obama’s controversial use of drone strikes.
2. Obama initially promised to close the Guantanamo Bay Detention Center, as seen in this montage, but reneged on his promise after he was elected.
3. Romney says he would have signed the National Defense Authorization Act, which codified indefinite detention. Obama signed the law in 2011.
4. Obama and Romney outline their (rather similar) positions on Iran and Israel.
5. During the infamous “47 percent” fundraiser, Romney says the Palestinians have “no interest whatsoever in establishing peace.”

Perhaps no other issue is more hotly debated in this campaign than Obamacare, which requires Americans to have health insurance either through their employer or through an individual mandate (with certain exceptions). In contrast, Romney, whose reforms in Massachusetts were the model for Obamacare, has promised to repeal the law on day one of his presidency if elected. Stephanie Mencimer breaks it down:

1. Romney and Obama spar on the defense budget at the recent presidential debate.
2. Romney claims “stretched to the breaking point” and promises to increase ship-building and buy more airplanes (he doesn’t mention that the ships he wants to buy are leaking and the planes are causing pilot’s to blackout).
3. Rep. Pete Stark (D-Calif.) makes the point that the Pentagon budget is bloated, and lobbyists are more interested in protecting defense contractors than economic growth.
4. Obama accuses the GOP of trying to wriggle out of across-the-board defense cuts (also known as sequestration).
5. Defense Secretary Leon Panetta says that sequestration will lead to a “hollow force” (a claim that the Congressional Research Service has debunked).

Is the “War on Women” real? Why did all the 2012 election candidates suddenly start debating rape? Kate Sheppard weighs in:

1. In August, Rep. Todd Akin (R-Mo.) says that victims of “legitimate rape” can’t get pregnant because “the female body has ways to shut that whole thing down.”
2. Richard Mourdock, who is running for US Senate in Indiana, says in October that pregnancy resulting in rape is “something God intended to happen.”
3. Paul Ryan calls rape “method of conception.”
4. Romney reiterates his pledge to strip federal funding from Planned Parenthood, which could gut clinics across the country.
5. President Obama has emphasized his support for women’s contraception and preemptive care throughout his campaign.
6. Romney used to say that he would work to protect landmark Supreme Court case Roe vs. Wade…
7. …And now he’ll work to overturn it.

Voters around the country will be deciding today on state ballot measures that would abolish the death penalty, legalize recreational marijuana, and ban gay marriage. Andy Kroll explains:

1. Ad supporting Washington state’s Initiative 502, which would legalize marijuana use.
2. Ad supporting California’s Prop. 34 to repeal the death penalty.
3. Ad opposing Prop. 34.
4. Ad supporting Michigan’s Proposal 2 to constitutionally guarantee workers the right to collective bargaining.
5. Son of two fathers explains his opposition to Minnesota’s Amendment 1, which would define marriage as a union between a man and a woman.

Evidence of election tampering and voter suppression has caused observers to wonder whether this is the “dirtiest election yet“—and that was before Hurricane Sandy further complicated matters by wreaking havoc on polling stations. Adam Sewer has the details: