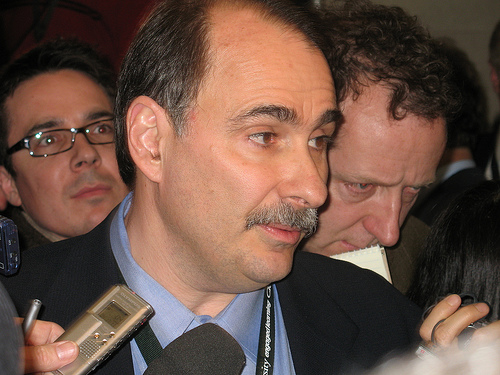 David Axelrod, the long-time adviser to President Barack Obama, turned to Twitter on Wednesday morning to fume about the state of money in politics today. In doing so, Axelrod revealed himself to be of the same mind on how to fix our political system as Mitt Romney, Mitch McConnell, Newt Gingrich, Republican super-attorney Jim Bopp (who brought the Citizens United case), and many movement conservatives.

Campaign finance system is a mess.Limits have just created a cottage industry for lawyers who devise schemes to circumvent them. 1/3

Too much money in politics. But if it’s inevitable, let it flow directly to candidates and demand full disclosure, with stiff penalties.2/3

And end the SuperPac and faux SuperPac game that too often allows donors to elude detection and candidates to deny responsibility. 3/3.

To be clear, what Axelrod is suggesting is a campaign finance system in which donors rich and not-so-rich can give without limit to the candidates they support. All those unlimited donations, though, would be fully disclosed soon after the donation is made. This is the no-limits-full-disclosure brand of reform, and it is straight out of the Republican/conservative playbook.

Consider this statement made by Mitt Romney in December 2011 on the issue of money in politics:

Romney told the Portsmouth Herald editorial board that “the best way” to fix our campaign finance system is “to let people make whatever contributions they want and have it instantly reported and know what conflicts exist so we know where the money is coming from.”

Those who favor more regulation of money in politics—banning super-PACs, say, or greater disclosure of dark-money nonprofits—hate this idea. They think it will corrupt the political process, and there’s plenty of historical evidence to bolster that claim. Which is why it’s surprising to see Axelrod, a dyed-in-the-wool progressive Democrat, essentially endorse the no-limits-full-disclosure approach.

David Donnelly, an advocate for taxpayer-funded public financing of elections and less big money in politics, tweeted back at Axe:

.@davidaxelrod with these statements ur giving #MitchMcConnell exactly what he wanted for his 71st birthday