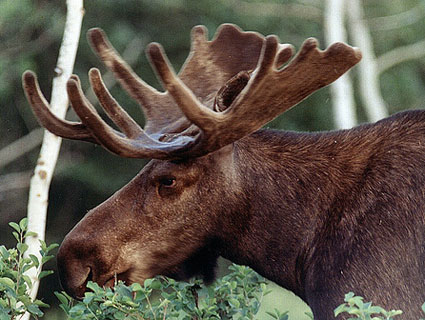 Minnesota’s iconic moose are in such bad shape that the state called off the 2013 hunting season on Wednesday. The heartiest herd, located in the northeastern region of the state, is down to around 2,700 animals, a 35 percent drop from last year and a startling 65 percent drop since 2008. Though the Minnesota Department of Natural Resources canceled hunting season, it stressed that hunters are not to blame for this worrisome news. “The state’s moose population has been in decline for years but never at the precipitous rate documented this winter,” said MDNR commissioner Tom Landwehr. “It reaffirms the conservation community’s need to better understand why this iconic species of the north is disappearing.”

Though the sharp decline has state officials somewhat baffled, many members of the conservation community feel climate change is at fault. Doug Inkley, senior scientist at the National Wildlife Federation, put it this way: “With the high temperatures in the summer, moose seek out shelter rather than feeding. Nutritional status declines, and they become more vulnerable to disease and parasites. It’s like a person who smokes is much more vulnerable to other diseases, and that can be associated with mortality.”

Minnesota’s not the only state witnessing a steep decline in moose. New Hampshire moose experts, according to Inkley, said tick numbers were way up in 2011 because of an unusually warm winter in 2010. Ticks proliferate in balmier weather, weakening moose and causing anemia; animals now have as many as 150,000 ticks on their fur, five times the normal amount. With that many ticks, says Inkley, “imagine the health condition you’d be in! You’d be anemic, weak; your probability of producing a calf that can survive would be worse.” One biologist told Inkley that there was likely 100 percent mortality of calves born the spring of 2010 in New Hampshire and a 40 percent mortality of adult moose in the winter of 2011.

Ticks proliferate in balmier weather; moose now have as many as 150,000 ticks on their fur, five times the normal amount.

The MDNR is leading an aggressive campaign to learn more about moose deaths, involving aerial stalking with helicopters, hi-tech collars, and an implant swallowed by a tranquilized animal that monitors a moose’s heart and internal temperature. The implant will send signals back to researchers, allowing them to pounce on a dead moose for study before weather or wolves get there first.

MDNR wildlife manager Lou Cornicelli told Minnesota Public Radio that there are “a lot of unknowns” with the climate change theory, and that it’s a complex issue. But Inkley’s pretty convinced that temperature inflections are the major factor debilitating the species, and he wishes Congress would quit stalling and do something to reduce carbon emissions. He criticizes Minnesota’s state leadership for failing to acknowledge climate as the key issue. “Minnesota says it’s getting warmer, and parasites are getting worse, but they aren’t linking the two,” he says. “Minnesota is being cautious, but I think the writing’s on the wall.”