The only musicians headlining the Boy Scouts’ annual Jamboree, “proof that rock music is dead” band Train and “Call Me Maybe” singer Carly Rae Jepsen, announced this week that they refuse to play the event, which is expected to have up to 40,000 attendees, as long as the organization continues to discriminate against gay Scouts and scoutmasters. Train wrote on Friday that it will not perform unless the Boy Scouts “make the right decision” and overturn the ban before the Jamboree. Jepsen appears to have dropped out entirely today, according to her Twitter account. The announcements come after a Change.org petition asking the artists to step down garnered 62,000 signatures in four days. 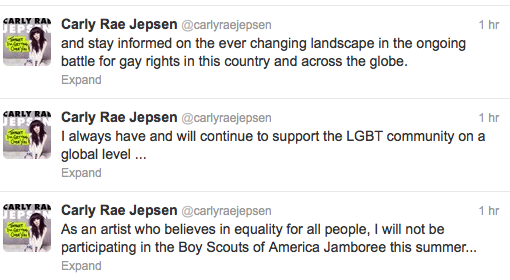 So who is going to serenade the Scouts while they partake in community service, Buckskin games, pioneering, technology quests, 3-D archery, and shotgun shooting?

“I was trying to think of artists that are anti-gay that the Boy Scouts could get, and I couldn’t think of any,” Rich Ferraro, a spokesman for the Gay & Lesbian Alliance Against Defamation (GLAAD) tells Mother Jones. “Perhaps they can ask Chuck Norris or Victoria Jackson.” Ferraro adds that this is the first year he’s aware of that the Boy Scouts have been without any entertainment because of the ban. Deron Smith, director of public relations for the Boy Scouts of America, told Mother Jones that the group remains “focused on delivering a great Jamboree program for our Scouts,” but did not comment on who would be replacing Train and Jepsen.

The Boy Scouts announced in January that they would consider overturning its decades-old anti-gay policy, but they are putting off any decision until May (even if the Scouts do overturn the policy, however, troops on the local level will still be allowed to discriminate). Pressure to overturn the ban has been intensifying over the last few months, with funders dropping out, Scouts renouncing their membership, and even President Obama denouncing the policy.

“No fair-minded media outlet, corporation or celebrity will want to partner with the BSA as long as the organization puts discrimination and anti-gay bias before the needs of young people,” GLAAD said in a statement. BSA’s Smith says the Scouts “appreciate everyone’s right to express an opinion” and “don’t have anything to add at this time.”