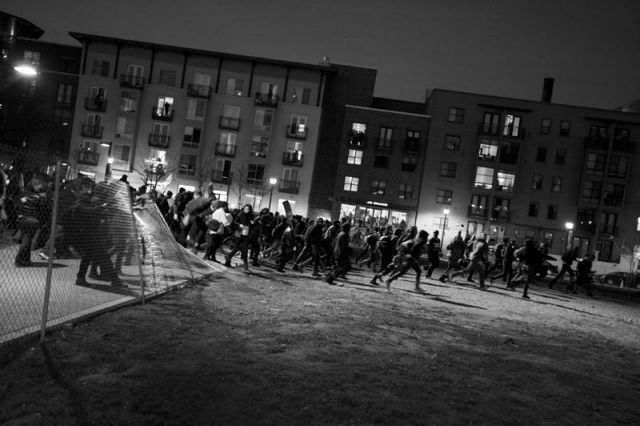 The shot above, by our photo editor Mark Murrmann, has been selected for inclusion in American Photography 29, a highly prestigious juried competition and photo book that leans toward edgier work. “Regarded as the books of record,” the competition website notes, they “are still produced in all their defiant, large-format, luxurious, hard cover glory.”

The winning photo was part of his series from a January 2012 Occupy protest in downtown Oakland, California, where tensions between protestors and police were at the boiling point. Mark, who had to run from the riot cops along with everybody else, offered this play by play:

It was another prime situation in which to be kettled—narrow streets, with large condos on all sides. And this time it happened: A line of police moved in from Telegraph, not letting anyone in the crowd out. Another line moved in from the opposite direction. I got cut off from the main protest, along with a few Occupy medics. We made our way around to Telegraph, on the other side of the kettle. A block away, in the kettle, a flash grenade went off. Two girls on bikes pleaded with police to be let out. Then, a large group of protesters broke down a recently re-erected chainlink fence enclosing a vacant lot next to the park. Protesters flooded the lot, breaking free of the kettle. The march resumed up Telegraph Avenue.

In the end, he managed to avoid arrest (unlike at least one of our reporters). Murrmann enjoys shooting punk rock shows in his spare time, so he’s pretty comfortable amid mayhem. He’s also got a sharp eye for light, motion, and composition—the resulting work is artful, gritty, and visceral. Here’s another batch he shot on the fly when a bunch of Occupy protestors decided to take over a Bank of America in San Francisco’s Financial District. In any case, it’s an honor well deserved. 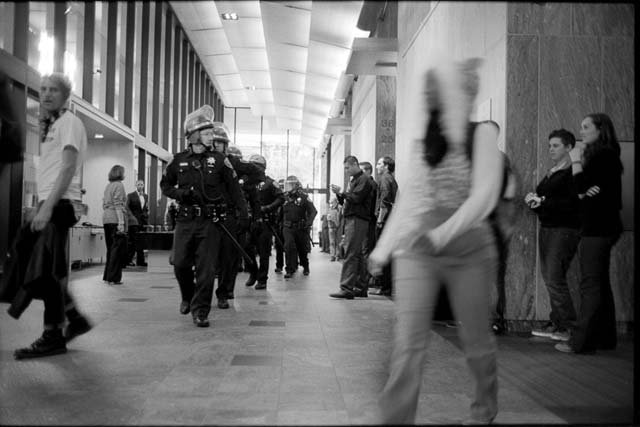