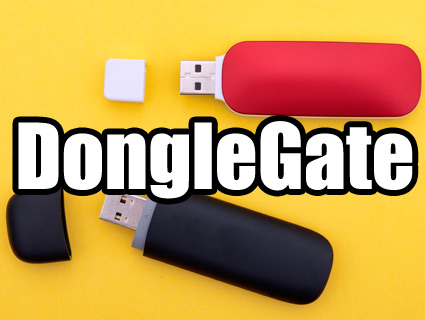 Another day, another boneheaded sexist misstep igniting a blamestorm in the tech world. The latest incident played out at the annual Python developer conference, which ended yesterday with multiple people getting fired, a woman of color enduring hundreds of violent and racist threats, apparent DDoS attacks knee-capping at least one website, and tech community outrage that’s attracted national attention.

It all started on Sunday at the PyCon event in Santa Clara, California, when Adria Richards, a female conference-goer and a technology consultant, overheard a conversation with a guy seated behind her at a panel. Richards claims their otherwise unremarkable techie chat turned sour when a neighboring guy joined in with a couple of jokes. They had to do with “forking” (copying someone else’s code) and “dongles” (little pieces of hardware), but in a way Richards found suggestive and inappropriate. Richards snapped a picture of the guys making the jokes, and posted it to Twitter. PlayHaven, a mobile-gaming site, confirmed to Mother Jones that both of the men photographed by Richards were PlayHaven employees at the time.

Richards also tweeted her seat location, a plea for someone to come by and talk to the guys in question, and a link to the PyCon Code of Conduct page, which defines unacceptable behavior at the conference (more on this later). Minutes later, a PyCon staffer came by and Richards spoke with him and a few other staffers in private. There are conflicting accounts of what happened next. In a blog post Richards posted the next day, she writes that staffers “wanted to pull the people in question from the main ballroom” and that they were escorted out. She doesn’t mention seeing them again. It was later widely reported across Twitter and tech forums that the two guys Richards pointed out to staffers were kicked out of the conference. Not so, lead conference organizer Jesse Noller told us in an email: “They were pulled aside, spoken with, and then returned to their seats to the knowledge of the staff and myself.” Noller says no one was removed from the conference due to this incident; someone was kicked out for using drugs in public, indoors, but that was two weeks ago, and no one’s been removed since.?

Noller says he can’t divulge what was discussed among staffers. Noller did share that the conversations occurred separately, were several minutes long each, and that “all parties seemed to be positive with the outcome?.” He says the terms of these talks are dictated by PyCon’s Code of Conduct, which was put in place last year. The latest version essentially spells out playground rules for Pythonistas—as Python coders are known—at PyCon. Everyone having a good time, networking, learning a lot, regardless of what they look like? Good. “Sexual language and imagery,” “exclusionary” and “offensive” jokes, unwanted physical contact, creating “a sexualized environment”? Bad—to the tune of potentially getting kicked out without a refund. “Above all else, it’s to ensure the safety and comfort of attendees,” says Noller, who pushed hard for PyCon to put its Code of Conduct in place last year, in the face of pushback from some in the community worried about PyCon morphing into “NoFunPyCon.” According to the keynote address, 20 percent of this year’s PyCon attendees were female, which, at tech events, qualifies as not terrible.?

Whatever was said in the hallway discussions, less than half an hour after Richards tweeted her complaints, the official PyCon twitter account had a followup:

Thank you @adriarichards for bringing the inappropriate comments to our attention. We’ve dealt with the situation.

In the meantime, lots of people had seen and shared Richards’s tweeted picture bearing the faces of developers alongside accusations of dirty jokes. The tweet made it onto Hacker News, a popular and highly respected tech forum, where it generated over 500 comments. The next day, Richards blogged about the whole incident in great detail, revealing that she’d endured another unpleasant conversation earlier that day—this one involving upskirts—and that she’d tried to point out the problem but didn’t think she’d gotten the point across. And as a veteran tech-conference-goer, none of this was exactly novel. This time, she explained, she’d had enough. “Three things came to me: act, speak and confront in the moment. I decided to do things differently this time and didn’t say anything to them directly. I was a guest in the Python community and as such, I wanted to give PyCon the opportunity to address this.” Richards expressed approval of PyCon’s handling of the event, and pride that she’d spoken up in the way she did, saying, “What has to change is that everyone must take personal accountability and speak up when they hear something that isn’t okay. It takes three words to make a difference: ‘That’s not cool.'”

The post went viral as well, and on Thursday, PlayHaven announced that the company had fired one of its employees in relation to the PyCon incident. “Alex Reid, who is photographed looking into the camera, did not make inappropriate jokes at PyCon and is still a valued member of the company,” Laura Perez, a spokesperson for PlayHaven, tells Mother Jones. “One of them is no longer with PlayHaven, for reasons listed on [PlayHaven’s] blog.“*

On Twitter and tech forums, some outraged posters argued that Richards overreacted, and if she felt that the jokes constituted harassment, she should have reported the incident privately to staff, not publicly broadcast photographs of the men and their comments so that the entire internet could see. Richards started getting racist and violent threats like these? (h/t Sasha Laundy): 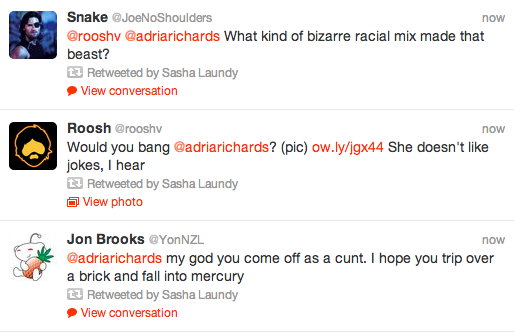 Thursday morning, Richards found herself out of a job, too; her employer, a cloud-based email service called SendGrid, announced her firing on Twitter. Richards’ termination triggered its own surge of support, from passionate tweets with the hashtag #SupportAdria to a DDoS attack on SendGrid that crippled their website for a good chunk of the workday on Thursday, making it impossible for users to access.

The tech community—if that oft-cited singular construct even exists—is fiercely divided over what to make of this strange saga. Jim Franklin, CEO of SendGrid, wrote in a statement late Thursday that while the company “supports the right to report inappropriate behavior, whenever and wherever it occurs,” they felt that Richards’ decision to tweet a photograph of the individuals “crossed the line”:

A SendGrid developer evangelist’s responsibility is to build and strengthen our Developer Community across the globe. In light of the events over the last 48+ hours, it has become obvious that her actions have strongly divided the same community she was supposed to unite. As a result, she can no longer be effective in her role at SendGrid.

Amanda Blum, a tech worker and WordCamp organizer, writes that “the tech industry, of which I am a part, is rampantly sexist. It runs so deep and so organic to the industry that even men who would see it in other places don’t recognize it in our insulated world.” Still, Blum wrote that she wishes Richards had personally confronted the guys who offended her, and hadn’t broadcasted her complaints on social media:

I imagine in an alternate future, Adria just turned around, smiled and whispered, “Hey. No offense, but I’m not all that interested in hearing about your dongle, you know?”…In this alternate future, at a future conference that developer quietly steers a conversation amongst friends away from this territory, without making a big deal of it.

Blum’s position echoes that of a person claiming to be the fired ex-Playhaven employee. That person said Richards had “every right to report me to staff.” But the poster, if he is who he claims, also wishes Richards had confronted him directly: “She gave me no warning, she smiled while she snapped the pic and sealed my fate.” Before outing the men publicly, the argument goes, Richards could have “really [thought] about if they deserve the backlash that they may face,” as Gayle Laakmann McDowell, who has worked as a software engineer for Microsoft, Apple, and Google, puts it. Others question why the same rule of thumb couldn’t apply to the jokey developer Richards outed: Before making his next “big dongle” joke, perhaps he might really think about how it could affect others in the room.

As programmer Advi Grimm points out, confrontation doesn’t always feel safe for someone in Richards’ position, socially, professionally, or even physically, and often with good cause. If he sensed there was a chance a confrontation might end badly, Grimm writes, he’d probably decide against it, too:

Maybe once the men in our industry have seen several examples of a woman “going nuclear”, they’ll have an incentive to be as respectful to a woman saying “not cool” as they would be to, say, me. Maybe then a woman will be able to turn around and say “knock it off” and be 99% sure that the guys she’s talking to will say “crap, sorry about that”.?

Going public has protected Richards from abuse, anyhow. According to the Daily Dot, Richards received a photo of a beheaded, bound, and bloody woman, with a home address and phone number next to it (allegedly belonging to Richards, although the site wasn’t able to confirm it).

@adriarichards Nobody wants you near their dongle you stupid slut

For its part, PyCon added a draft addition to its Code of Conduct yesterday starting that “public shaming can be counter-productive to building a strong community.” (Noller says this language, which has since been removed from the site, has not been formally put in place yet and is still under revision.) Mother Jones noted last year that women are still deeply underrepresented in tech professions, and this “testosterone-fueled boneheadedness can also turn into a PR nightmare, especially in an industry awash in social media.” That’s clearly something PyCon tried to avoid with its Code of Conduct, and many in the community worry that PyCon 2013 will be remembered more for this sad, frustrating, and confusing series of events than the community-building, skill sharing, and idea-generating that conference organizers, more than 100 unpaid volunteers among them, must have worked really hard to put together. But at least one person at the center of this massive meltdown wouldn’t do anything differently:?

As the person who brought Adria’s original tweet to the attention of PyCon staff, I would do it again. Let’s build the best community we can

*This post originally stated that PlayHaven let go of the employee because of the reasons listed on Richards’ blog. The employee was let go for making “inappropriate comments,” and no further detail was provided. It has been corrected.