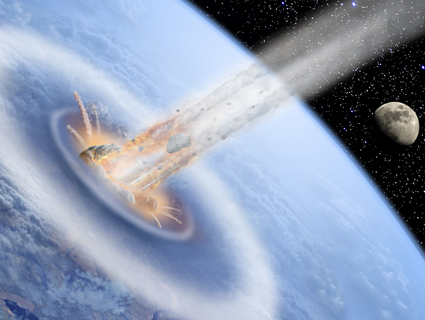 Not on Obama's watch, says Obama, according to Bill Nelson.<a href="http://www.shutterstock.com/cat.mhtml?lang=en&search_source=search_form&version=llv1&anyorall=all&safesearch=1&searchterm=asteroid&search_group=#id=121196200&src=nNSyJT8oYvGM0Ph3FmCQOg-1-9">puchan</a>/Shutterstock

Does President Barack Obama intend to capture an asteroid and place it into lunar orbit?

This seems more like a Newtonian (as in Gingrich) idea. But on Friday afternoon, the office of Sen. Bill Nelson (D-FL) blasted out a press release disclosing that Obama’s forthcoming budget includes a $100 million plan to tow an asteroid into moon orbit. And this will be done for freedom—that is, for the purpose of saving the planet Earth from complete annihilation. (This is not about just serving the Democratic Party’s base.)

Here’s the gist of the press release:

An excerpt (emphasis mine):

Tucked inside President Barack Obama’s proposed federal budget for next fiscal year is about $100 million to jump start a program scientists say is the next step towards humans establishing a permanent settlement in space. That, at least, is what U.S. Sen. Bill Nelson says we’re likely to see when the White House unveils its fiscal year 2014 budget around the middle of next week. Nelson has been briefed by scientists…In a nutshell, the plan in NASA’s hands calls for catching an asteroid with a robotic spacecraft and towing it back toward Earth, where it would then be placed in a stable orbit around the moon.

Next, astronauts aboard America’s Orion capsule, powered into space by a new monster rocket, would travel to the asteroid where there could be mining activities, research into ways of deflecting an asteroid from striking Earth, and testing to develop technology for a trip to deep space and Mars.

“This is part of what will be a much broader program,” Nelson said today, during a visit in Orlando. “The plan combines the science of mining an asteroid, along with developing ways to deflect one, along with providing a place to develop ways we can go to Mars.”

The president already has established the goal of landing astronauts on a near-Earth asteroid by 2025. This new plan would bump up the date to 2021. As in, not a moment to waste.

Nelson, a former astronaut, has an affinity for asteroids and United States asteroid policy; last month, he was on a Senate panel that grilled scientists about the consequences of an asteroid striking earth. He was keen to know if there is any way for humankind to fight back against asteroid aggression.

Obama has often been slammed for supposedly not being bold, for not being tough enough with foes. But if Nelson is right, Obama is ready to do what’s necessary to take on the asteroid threat and make the United States the first nation to claim a giant space rock. Forget Spock or Luke Skywalker; he’s going the full Bruce Willis: