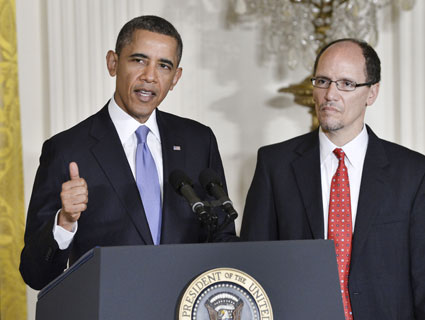 President Obama nominates Thomas Perez to be Labor Secretary during a ceremony at the White House in March.Zhang Jun/Xinhua/ZUMAPress

Thomas Perez, the head of the Justice Department’s civil rights division and President Barack Obama’s nominee to head the Department of Labor, is getting some support from unexpected corners: Republicans, particularly in his home state of Maryland.

“I think he’s going to be a very fine secretary of labor for us,” says Michael Steele, former chair of the Republican National Committee who first met Perez when he was a member of the Montgomery County Council and Steele was Lt. Governor of Maryland. “He’s honest, direct, approachable and willing to work hard to get it right.”

Steele isn’t the only Maryland Republican praising Perez. “He’s just a trustworthy guy,” says John Kane, a former chair of the Maryland GOP. “If I had to put a trust together to manage my affairs after I was gone, Tom would be one of the top three guys I would pick to do that, even though I disagree with him more than half the time.”

Monday, John R. Dunne, a Republican who was head of the civil rights division during the George H.W. Bush administration, sent a letter to senators urging them to confirm Perez, calling him “an excellent lawyer,” and “a dedicated public servant with a deep commitment to the common good.” Dunne hired Perez during his Perez’ first stint in the Justice Department. Perez received another public endorsement from a former official in the George H.W. Bush administration Wednesday afternoon, when Louis W. Sullivan, former head of the department of health and human services, wrote an op-ed in The Hill that described Perez as an “engaging, thoughtful individual dedicated to public service and able to work with all.”

The Senate is set to take up Perez’ nomination to be labor secretary Thursday. Despite the praise he’s received from his home-state colleagues from across the aisle and in past administrations, Republicans in Congress are showing Perez no love.

On Monday, the House government oversight committee released a 65-page report on a deal Perez helped broker with the city of St. Paul to withdraw a Supreme Court case that could have gutted the Fair Housing Act. Senator Chuck Grassley (R-Iowa) called Perez “the ring leader of the quid pro quo deal that ensured the taxpayer would not be able to recover hundreds of millions of dollars,” and accused him of “misleading” and being “less than forthcoming” with Congress.

But missing from the report issued by GOP dominated oversight committee was any evidence that Perez—who consulted with ethics lawyers at the Department of Justice before making a decision—broke any laws or ethics rules. Republicans oppose the use of the disparate impact standard, a legal guideline that says that discrimination doesn’t have to be intentional to qualify as discrimination. They were hoping that the St. Paul case would give the conservative-dominated Supreme Court an opportunity to strike down the use of disparate impact in housing as unconstitutional. They’re mad at Perez for his role in preventing that from happening. “They are attempting to recharacterize a policy disagreement about two cases into something unethical,” Kathleen Clark, a legal ethics expert and a professor at Washington University School of Law told Mother Jones in March.

The Democrats on the House oversight committee issued their own memo on Monday that echoes Clark’s conclusion: “Rather than identifying any inappropriate conduct by Mr. Perez or other Department officials, it appears that the accusations against Mr. Perez are part of a broader political campaign to undermine the legal safeguards against discrimination that Mr. Perez was protecting.”

This signal-to-noise ratio in Congressional GOP’s objections is evident from Grassley’s own statement. Lying to or otherwise obstructing a congressional investigation is a federal crime, but when asked repeatedly whether Grassley was accusing Perez of breaking the law, Grassley’s office didn’t respond.

Steele chalked up the objections to “folks” being “petty and political,” says Steele, who cautioned that he hasn’t looked at the particulars of the St. Paul case. “The goal is to get it right and Perez has always tried to do that.”