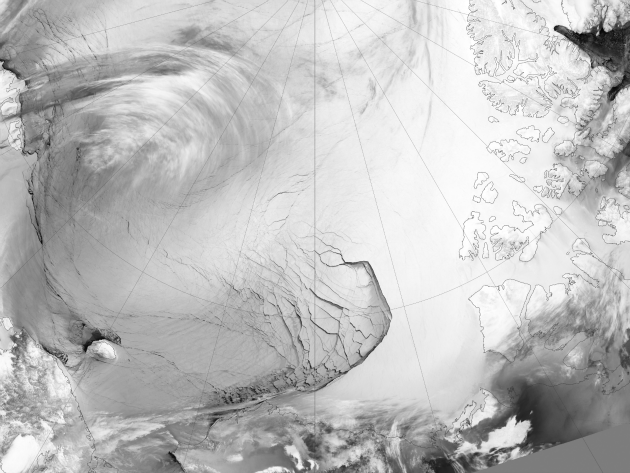 As I reported last week, sea ice in the Arctic Ocean reached its maximum growth for the winter on about 13 March and is now losing more ice than it’s gaining. The National Snow and Ice Data Center initially reported that 2013 was the sixth lowest sea ice extent on record. NASA has revised that to an even more dismal fifth-lowest sea ice extent on record.

In the image above—and even more so in the video time-lapse below—you can see the tremendous dynamism at work in this frozen ocean. Jostled by monster winds and ocean currents, sea ice sheets constantly shift, crack, and grind against one another.

And that’s what’s happening on the left side of the video (above) in late January, according to NASA’s Earth Observatory. A high-pressure weather system parked over the region produced warmer temperatures and winds flowing in a southwesterly direction. Those winds drove the Beaufort Gyre clockwise. And that gyre pulled pieces of sea ice west past Point Barrow, Alaska’s northwestern-most point.

?The crack-up began in late-January and spread west toward Banks Island throughout February and March 2013. A series of February storms passing over central Alaska exacerbated the fracturing. By the end of February large pieces of ice had borken all the way to the western coast of Banks Island, a distance of ~600 miles (1,000 kilometers).

It’s fascinating for me to see this area of the Arctic Ocean—particularly the Beaufort Sea part of the Arctic Ocean—which I sailed through in its entirety last October (more on that here) and saw not one speck of sea ice then. So all of the ice cap breaking up here is likely young, first-year ice.

Here’s NASA’s two-minute explainer on the Arctic winter of 2013, amid the mega-changes underway so far this century. Chilling.