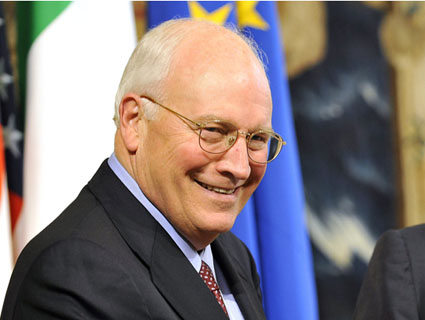 Dick Cheney has never been short on chutzpah. Jumping aboard the GOP scandal-mongering machine, the former vice president appeared on Fox News (where else?) and declared to Sean Hannity (who else?) that President Barack Obama and his aides “lied” about the attack in Benghazi, Libya, last September that left four Americans dead. “I think it’s one of the worst incidents frankly that I can recall in my career,” Cheney huffed—as if 9/11 had never happened. The former veep went the full Monty and echoed (discredited) right-wing charges that the Obama administration refused to deploy military forces to help Ambassador Chris Stevens and other Americans when they were assaulted in Benghazi.

Rather than painting pictures of dogs, the out-of-power Cheney remains committed to blasting his administration’s successor, as if memory (his and the nation’s) does not exist. After leading the country to war on a foundation of falsehoods, Cheney shows a boatload of nerve in accusing Obama and his crew of lying about Benghazi because the talking points assembled after the attack by an interagency group (that included the White House) were not fully accurate.

That’s what Cheney said at a speech on August 26, 2002, at the annual Veterans of Foreign Wars convention, as the Bush-Cheney administration prepared to roll-out its campaign to win popular support for an invasion of Iraq.

This statement—no doubt at all about Iraq’s WMD!—was false. The intelligence regarding Iraq’s supposed WMD program was full of uncertainty—and there was no intelligence indicating the Iraqi dictator was gathering weapons to use against the United States. On the stage with Cheney that day was retired General Anthony Zinni, a former commander in chief of US Central Command. He recently recalled his reaction to Cheney’s assertion: “It was a shock. It was a total shock. I couldn’t believe the vice president was saying this, you know? In doing work with the CIA on Iraq WMD, through all the briefings I heard at Langley, I never saw one piece of credible evidence that there was an ongoing program.”

“We do know, with absolute certainty, that [Saddam Hussein] is using his procurement system to acquire the equipment he needs in order to enrich uranium to build a nuclear weapon.”

During a Meet the Press appearance on September 8, 2002, Cheney maintained that Iraq had been procuring aluminum tubes to use in an enrichment process designed to yield fuel for nuclear weapons. This was, as he might say, a big-time charge: the tyrant of Baghdad on the verge of possessing nuclear weapons. How frightening. And days later, Cheney repeated this claim: “We now have irrefutable evidence that [Saddam] has once again set up and reconstituted his program to take uranium, to enrich it to sufficiently high grade, so that it will function as the base material as a nuclear weapon. And there’s no doubt about the fact that the level of effort has escalated in recent months.”

This, too, was not true. As it turned out, the tubes were not acquired for any nuclear weapons program. But it’s not just that Cheney had been wrong because the intelligence was inaccurate. At the time Cheney made his unequivocal statement, intelligence experts within the US government were debating whether these tubes could be used to create material for a nuclear weapon, with the nuclear weapons experts contending the tubes were not suitable for enrichment. The “evidence” was not even irrefutable within the US government’s own ranks. As the Washington Post then reported, “US officials have acknowledged differing opinions within the US intelligence community about possible uses for the tubes—with some experts contending that a more plausible explanation was that the aluminum was meant to build launch tubes for Iraq’s artillery rockets.” Cheney claimed there was “absolute certainty” on this point. That was completely false.

“Mohamed Atta, who was the lead hijacker, did apparently travel to Prague on a number of occasions. And on at least one occasion, we have reporting that places him in Prague with a senior Iraqi intelligence official a few months before the attack on the World Trade Center.”

This was another key—and quite dramatic—part of the case for war Cheney presented on Meet the Press on September 8, 2002: the 9/11 ringleader skulking about with a covert op for Saddam. Host Tim Russert asked, “What does the CIA say about that?” Vice President Cheney replied, “It’s credible.”

Actually, by then, the CIA and the FBI had both cast significant doubt on the Atta-in-Prague report. The CIA did not consider it “credible.” But that didn’t stop Cheney from misleading Russert and his audience—and from repeatedly referring to this discredited allegation in the months ahead. As the 9/11 Commission’s final report would note, there was no factual basis to the report that Atta had huddled with an Iraqi agent in Prague.

If the issue is White House lying, these Cheney remarks make a far stronger case than the revised Benghazi talking points (which appear to have been edited to limit information that was unconfirmed or inconvenient). More important, Cheney’s untrue statements were purposefully designed and deployed for a specific end: to whip up public sentiment for a war that would claim thousands of lives and over a trillion dollars in US taxpayer money. Though Cheney obviously knows much about Oval Office fibbing, he is probably the most inappropriate person—except for perhaps one other—to accuse any White House of lying.