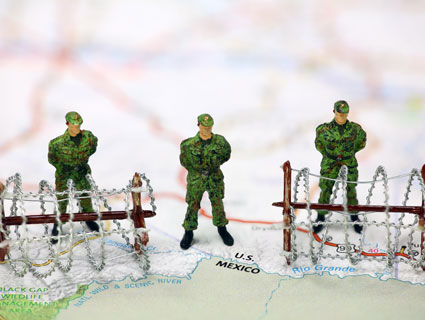 The controversial border security amendment authored by Sen. John Cornyn (R-Texas), derided by Democrats as a “poison pill,” was voted down Thursday on the Senate floor. That leaves the door open for a less restrictive border security compromise brokered this week with the bipartisan Gang of Eight by Sens. Bob Corker (R-Tenn.) and John Hoeven (R-N.D.). The measure would require doubling the number of border patrol agents to 40,000 and expanding a southern border fence to 700 miles at a cost of $30 billion.

After his amendment was tabled, Cornyn told Mother Jones that he wouldn’t decide whether to endorse the Corker-Hoeven compromise until he saw the full text. “They have helped focus attention on border security and why it’s so important to the bill, but I’m going to reserve any comments, obviously, until I have a chance to actually read it,” Cornyn said.

“How much more is it going to cost?” Cornyn later asked Hoeven on the floor. Hoeven, citing Tuesday’s Congressional Budget Office report on the immigration bill that projected a $197 billion federal deficit reduction over 10 years, said that would more than pay for the amendment’s $30 billion price tag. (Cornyn’s bill just called for a reallocation of $6.5 billion of border security funds already in the bill.) Others, like Sen. Jeff Sessions (R-Ala.)—who introduced a multi-billion dollar proposal of his own that was rejected in committee—dismissed the Corker-Hoeven amendment as something that “will just throw money at the border.” (If recent history is any indication, Sessions is probably right.)

The Gang of Eight nevertheless believes that the Corker-Hoeven amendment will attract around 10 more conservative votes, but even if the Senate bill passes with the 70 votes the gang wants in order to pressure the House to pass a comprehensive companion bill, it’s not clear the lower chamber will move in that direction. Rep. Bob Goodlatte (R-Va.), who chairs the judiciary committee, is opposed to a comprehensive bill; on Tuesday his committee began deliberations on a series of piecemeal bills on law enforcement issues. On Thursday, Goodlatte expressed skepticism about the Corker-Hoeven compromise, telling reporters that simply beefing up border security wouldn’t address issues such as immigrants who enter the country legally but stay after their visas expire. (Later, Corker said on the Senate floor that he hoped the House would add such a measure.)

“I think the House is a whole different animal,” Cornyn said, asked if he thought the successful passage of the Corker-Hoeven amendment might get a majority of House Republicans—the minimum level of support that House Speaker John Boehner (R-Ohio) said it would take before he allowed a vote on comprehensive immigration reform—to take up the Senate bill. “They’re going to produce their own bill. It’s all about getting to conference [committee],” where differences between the House and Senate bills would be resolved.