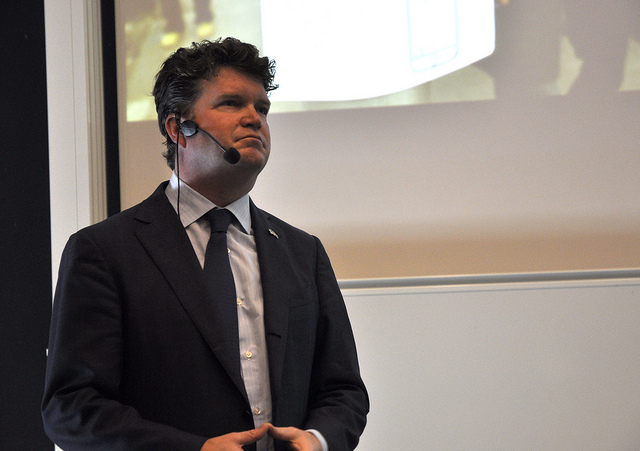 Matthew Barzun, Obama's national fundraising guru, will become the US' ambassador to the United Kingdom.<a href="http://www.flickr.com/photos/borasstad/5730348314/sizes/z/in/photolist-9JnwUS-9JjMNv-9JjGwc-8M6PHM/">borasstad</a>/Flickr

When he first ran for president, Barack Obama pledged to…well, you know the story. No more politics as usual, curbing the clout of lobbyists and special interests, the most transparent administration ever, etc., etc. But there’s one time-honored, you-scratch-my-back-I’ll-scratch-yours Washington tradition that Obama has been more than happy to continue: Rewarding major campaign fundraisers with plum gigs as ambassadors.

At last count, 26 of Obama’s existing and nominated ambassadors had raised money for the president and the Democrats. Together, those fundraisers scared up at least $13.6 million for Obama’s campaigns, the Democratic Party, and other Democratic congressional candidates, according to Bloomberg News.

One in three of Obama’s diplomatic appointees have been political appointees, according to the American Foreign Service Association. That’s right on track with his predecessors going back to Ronald Reagan.

These fundraisers aren’t getting shipped off to far-flung locales. Instead, they can look forward to a few years of fine dining and nightly parties. For instance, there’s Matthew Barzun, who chaired Obama’s team of fundraisers, or “finance committee,” who was named US ambassador the UK. Rufus Gifford, the chief fundraiser for Obama’s 2012 campaign and his second inauguration, will head off to Denmark. A slew of other regional fundraisers have also scored high-profile ambassadorships: Alexa Wesner (Austria), Denise Bauer (Belgium), John Emerson (Germany), Kirk Wagar (Singapore), and Jim Costos (Spain). A White House spokesman told Bloomberg that each of Obama’s ambassador picks was qualified for the job, adding, “None of them was chosen because they supported the president’s campaign and none of them should have been ruled out just because they did.”

Early in his first term, Obama acknowledged that “there probably will be some” political types serving in diplomatic posts. But the rainmaker-to-ambassador pipeline has continued enough under Obama’s watch that the foreign service association last year urged him to cut down as naming political allies to diplomatic positions. “Now is the time to end the spoils system and the de facto ‘three-year rental’ of ambassadorships,” the group’s governing board said in a statement. “The appointment of non-career individuals, however accomplished in their own field, to lead America’s important diplomatic missions abroad should be exceptional and circumscribed, not the routine practice it has become over the last three decades.”