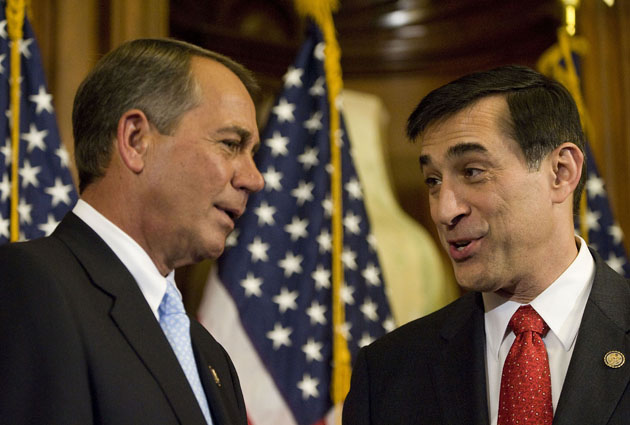 As Mother Jones revealed last week, Groundswell, the hush-hush right-wing strategy group partly led by Ginni Thomas, the wife of Supreme Court Justice Clarence Thomas, wanted to hype the Benghazi tragedy into a full-fledged scandal for the Obama administration, as part of its “30 front war” on the president and progressives. A secret audio tape of one of Groundswell’s weekly meetings shows that prominent members of the group pressed House Speaker John Boehner and Rep. Darrell Issa (R-Calif.), the chair of the House oversight committee, to expand the Benghazi investigation and make this supposed scandal a top-priority for congressional Republicans. This recording indicates Groundswell’s mission extends beyond message coordination to scandal-stoking.

The tape has been posted at Crooks and Liars, a progressive web site, and it captured the first 20 minutes of Groundswell’s May 8 meeting. (The site does not say how the recording was obtained.) The meeting opened with a prayer (“Father, we thank you for the opportunity to gather here as free Americans”), and a roll call was taken. Among those present were former GOP Rep. Allen West, Frank Gaffney of the Center for Security Policy, Jerry Boykin of the Family Research Council, Tom Fitton of Judicial Watch, Stephen Bannon of Breitbart News, and Ginni Thomas. Catherine Engelbrecht, a founder of True the Vote, led the meeting, and the first order of business was a report on the Benghazi controversy from Boykin and Gaffney.

The pair reported on meetings they had held the previous night with Boehner and Issa. The two Groundswellers had encouraged the lawmakers to set up a special committee to investigate the attacks on the US facilities in Benghazi. Boykin, according to the recording, noted that Boehner had said he wanted the process “to play out” first, apparently meaning that he wasn’t yet ready to step up the GOP Benghazi campaign. Boehner, Boykin recounted, had expressed the concern that were he to create such a committee, the media would cover it as a political stunt designed to bring down Obama.

Boykin, a retired general and Christian fundamentalist who caused a dust-up in 2003 when he gave a speech (while still on active duty) saying that his god was “a real god” and Allah was an “idol,” told the Groundswellers that he expected the Benghazi matter to blossom into a full-blown scandal: “We’ve got an ugly baby here and it’s going to get uglier.” He maintained that “we’re going to find…a huge deception.”

Gaffney, a birther who has been booted out of several conservative outfits for his fiercely anti-Islam views and who has accused Obama of “submission to Islam,” added, “I’m somewhat encouraged that they’re taking this thing very much to heart and we really impressed upon [Boehner] that there’s a lot of restiveness on the part of folks like us, and some of their donors as a matter of fact, about what’s happening here.” In other words, Boykin and Gaffney were issuing something of a warning to Boehner and Issa: Go hard on Benghazi or risk losing financial and grassroots support.

After the two were done, Bannon, the executive chairman of Breitbart News, counseled fellow Groundswellers on how they should handle the Benghazi controversy. Don’t mention impeachment of Hillary Clinton, he cautioned, for that would only politicize the issue and “hurt the goal” of establishing a special congressional committee. Then Engelbrecht added, “I think they have all the notes on Benghazi. Let’s move ahead.”

As of yet, Boykin, Gaffney, and the other Groundswellers have not gotten the special Benghazi committee they wanted. But the recording shows that Groundswell has access to the top leaders of the GOP, and its reps are not reluctant to pressure those pols.