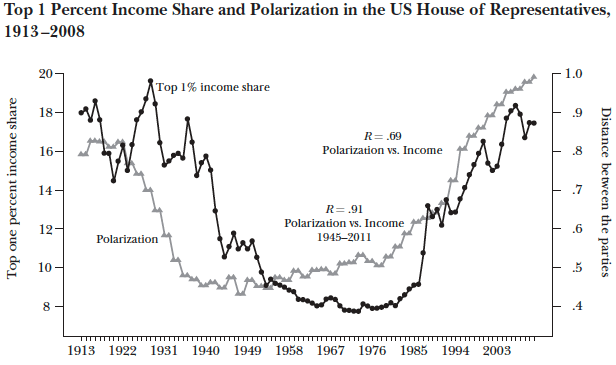 To the long list of problems linked to income inequality, you can now add another: political gridlock. As illustrated above, the dramatic fall and rise of income inequality over the past century correlates remarkably closely with the level of political polarization in the US House of Representatives.

On its face, this correlation seems incredibly counterintuitive. As a greater share of wealth concentrates in the hands of the top 1 percent of income earners, you’d expect the other 99 percent of Americans to act as a more-unified voting block, electing politicians who’d level the economic playing field.

But that hasn’t happened. And nobody really knows why.

The creators of this chart, which accompanied a paper in the most recent issue of the Journal of Economic Perspectives, float a laundry list of explanations: the ideological influence of free market capitalism, falling rates of voter turnout among the poor, higher standards of living, gerrymandering, and the influence of money in politics.

Of course, correlation isn’t causation—we can’t say whether inequality fuels political polarization or vice versa. The widening ideological chasm in Congress has certainly prevented Washington from correcting the sort of policy mistakes—tax cuts, financial deregulation, “free trade” deals—that continue to enrich the few at the expense of everyone else. The question is whether the further growth of inequality will eventually change that, or, as it has in countries such as Egypt, fuel a politics ever more defined by extremes.