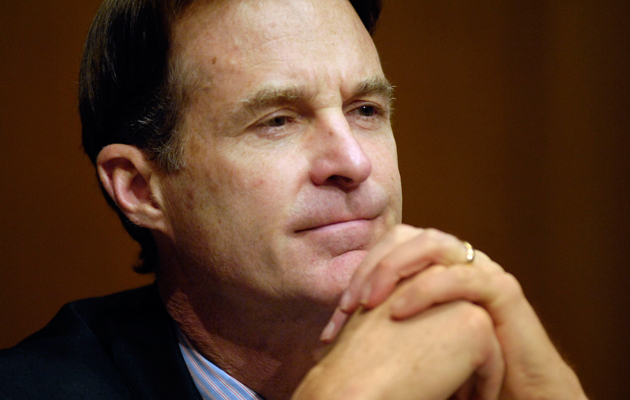 As a US senator Evan Bayh (D-Ind.) was liked, but not well liked. “He was a popular Democrat in a red state, and most of his efforts seemed to be devoted to keeping it that way,” as the Washington Post‘s Ezra Klein put it upon Bayh’s retirement in 2011. Bayh talked a lot about the deficit without doing much to lower it and talked about Washington dysfunction without doing much to ease it.

After retiring, Bayh became a partner at a Washington lobbying firm. His first issue: something called the medical-device tax, a provision of the Affordable Care designed to pay for the bill’s expanded coverage provisions by extracting more revenue from companies that manufacture things like pacemakers. “As a result of the looming device tax, production is moving overseas, good jobs are going to Europe and Asia, and cutting-edge medical devices will now be produced elsewhere for import into the U.S,” he wrote in an op-ed for the Wall Street Journal last year. “Meanwhile, the impact on the quality of care is incalculable but no less real. Thirty billion dollars must be taken out of operations or R&D. Who knows what lifesaving devices that might have been developed will fall victim to this tax?”

That wasn’t really true. As an editorial in Bloomberg View put it, “Just about everything the medical-device industry says about the tax is either untrue or exaggerated.” Bayh’s claim was based on an industry-funded study that in turn offered no support for its fearful claims; repealing the tax would mean the law no longer paid for itself; and because more people would have access to health care under the law, demand for medical devices was guaranteed to increase.

But the industry’s argument took hold. Flash-forward to Tuesday morning, with the nation teetering on the brink of default and the federal government into its third week of a shutdown. After raging against the Affordable Care Act since 2009 as a tyrannical expansion of government, House Republicans appeared to have settled on a final proposal that settled for a far short of repealing or defunding Obamacare: a repeal of the medical device tax. As the Daily Beast‘s Ben Jacobs pointed out, it was hardly the sweeping victory conservative activists hoped for when they packed the House with true believers in 2010. The push for the device tax repeal made for strange alliances—even Sen. Elizabeth Warren (D-Mass.), whose state is home to a number of major medical device firms, supported it.

Tuesday afternoon, after some conservative Republicans raised concerns that the repeal amounted to “crony capitalism,” GOP leaders stripped the device tax repeal from the proposed deal. If it had become law, Evan Bayh’s change to the Affordable Care Act would have added $30 billion to the deficit he used to care so much about.