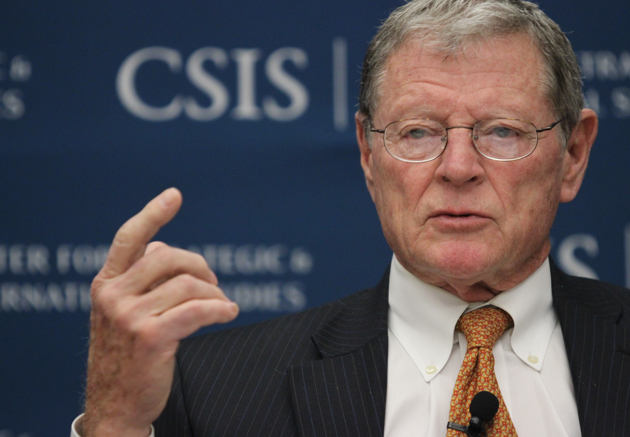 On Sunday, Sen. James Inhofe (R-Okla.) said that if Obamacare had been fully in place this year, he probably would have died of a heart attack. That’s not true.

After going in for a routine colonoscopy a few weeks ago, Inhofe’s doctors found that his arteries were dangerously clogged, so they immediately took him to the ER, the 79-year-old senator told Aaron Klein on his WABC radio show Sunday. He suggested that if he had been living a part of the world with “socialized medicine like Obama is trying to impose upon America,” he never would have gotten the life-saving surgery: “A person can find out, here in the US, that he has this emergency situation where he has got to have immediate heart surgery. And if you are in a country other than the US, a lot of them, you can’t get it done. In my case, with my age, that would have been about a six-month wait. Because I hadn’t had a heart attack,” Inhofe said.

“It’s preposterous and couldn’t be further from the truth,” says Ethan Rome, executive director of Healthcare for America now, a non-profit that backs Obamacare. “When people in authority say such ridiculous things,” he adds, “It’s a dangerous thing because people will take him seriously.” Here’s what the senator got wrong:

1. Obamacare is not socialized medicine. “Obamacare bears no resemblance to Canadian-style socialized medicine,” says Jonathan Gruber, an MIT economist who helped craft the massive health care law. Obamacare expands private health insurance coverage for most people, and in states that are allowing it, the law also expands one of our existing public health programs, Medicaid.

2. There’s no rationing of health care under Obamacare. There are provisions throughout the Affordable Care Act that prohibit restrictions on care. The law controls costs by requiring insurers to devote a certain percentage of premiums to health care costs instead of profits, for example, not by restricting the level of care Americans receive. And the fact that more Americans will enroll for coverage will not mean longer wait times for care, says Timothy Jost, a health law scholar at the Washington and Lee University School of Law. Some people who were previously uninsured may initially find it harder to find a primary care provider. But Jost says Obamacare won’t stand in the way of treatment if you’re about to have a heart attack. “Under the Affordable Care Act, you get to see the doctor of your choice and get the care that you need when you need it,” says Rome. “The experience [Inhofe] had is an experience that more people will have because of the law.”

4. Obamacare is already the law. Inhofe implied that he was saved from a heart attack because Obamacare was not yet in place. “In case he missed it, we are three and a half years into the implementation of the Affordable Care Act,” Rome says. Even though the main component of the law—the requirement that all Americans purchase health insurance—goes into effect in 2014, many other provisions of the law are already in effect. Six months after Obama signed the law, for example, insurers could no longer deny family insurance to children with pre-existing conditions. The part of the law that forces insurers to spend a majority of premium dollars on medical care went into effect in 2011.