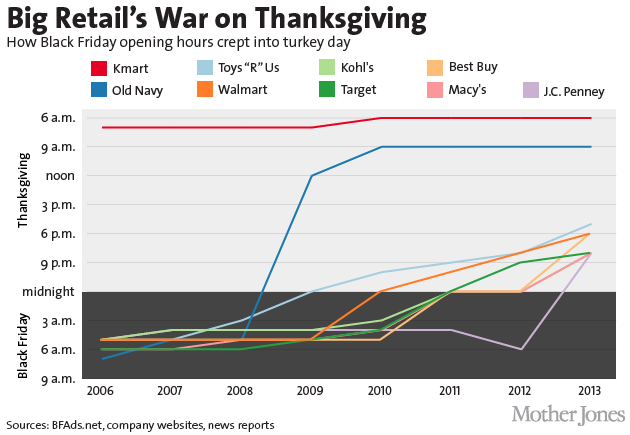 Note: Some opening times may vary by region. Chart by AJ Vicens

In case you haven’t noticed, Black Friday isn’t just on Friday anymore. The retail industry’s high-density mass of starry lights, Santa dioramas, and door-buster shopping deals really ought to be renamed the Black Hole—it just keeps sucking up everything around it. That holiday known as Thanksgiving? Pretty much gone. Especially if you work for one of the nation’s largest retailers.

In 2006, Bart Reed, Best Buy Co.’s consumer marketing director, told the Charleston Gazette that the company had decided not to open its stores any earlier than 5 a.m. on Black Friday because it wanted to give its employees a “work-life balance.” Then, five years later, Best Buy moved its Black Friday opening back to Thursday at midnight. This year, for the first time, it will open at 6 p.m. on Thanksgiving Day.

Best Buy is far from alone in its cold-hearted greed. The chart above shows how America’s biggest retailers have competed in recent years to appeal to crazed shoppers at the expense of their employees—not to mention the one holiday where we’re supposed to contemplate being grateful for what we’ve got, rather than just coveting more stuff.

The undisputed leader in the assault on Thanksgiving is cleary Kmart, which has opened its doors on Turkey Day for the past 22 years. Yet this sad legacy hasn’t stopped Kmart from finding ways to make its workers even more miserable. For Thanksgiving 2010, Kmart closed at the arguably reasonable hour of 9 p.m. In 2011, it closed at 4 p.m. and then reopened four hours later, before closing at 3 a.m. on Black Friday. That must not have been crazy enough, since this year Kmart will open at 6 a.m. on Thanksgiving Day and stay open for 40 hours straight, not closing until 11 p.m. on Black Friday.

That sounds pretty bad, until you consider that for years many Walmart stores have been open 24 hours a day, including Thanksgiving. This year Walmart will roll out its Black Friday specials at 6 p.m. on Thanksgiving, when it will presumably need to bulk up its stores with more associates who’d normally be eating turkey with their families. At least some 24-hour Walmarts used to close on Thanksgiving Day: “Local Wal-Marts open at 5 a.m. [on Black Friday], with 24-hour stores closing for Thanksgiving and reopening then,” reads a 2006 story from California’s Inland Valley Daily Bulletin.

At least one mega-retailer has resisted the Black Hole: Costco. The unionized big box chain will remain closed on Thanksgiving and open on Friday at its regular hour of 10:00 a.m. The company wants it workers to be able to spend time with their families, Costco CFO Richard Galanti told me. “It’s pretty straightforward: It’s a major holiday with family and friends, our employees work hard, and it’s the right thing to do,” he said. “Black Friday used to open at 6 a.m., then at 3 a.m., then at 12:01 a.m.—when does it stop?”