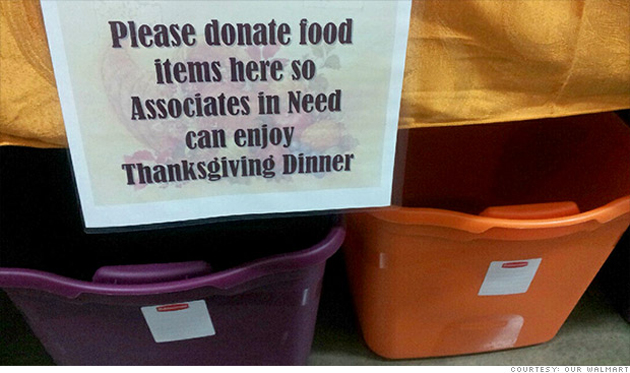 Walmart has gotten a lot of bad press this week over news of an Ohio store holding a food drive for its own workers, who were unable to buy Thanksgiving groceries on the retail giant’s paltry wages. The store managers deserve credit for their thoughtfulness, but wouldn’t it be better if Walmart simply paid its workers enough to feed themselves? A new report from Demos, a liberal think tank, suggests that doing so wouldn’t be as hard as you might think.

Walmart could continue spending $7.6 billion to buy back its own stock, or it could pay every worker $14.89 an hour.

According to the report, “A Higher Wage Is Possible,” Walmart spends $7.6 billion a year buying back stock. Those purchases drive up the company’s share price, further enriching the Walton family, which controls more than half of Walmart stock (and for that matter, more wealth than 42 percent of Americans combined.) If Walmart instead spent that money on wages, it could give each of its 1.3 million low-paid US employees a $5.83 per hour raise—enough to ensure that all of its 1.3 million workers are paid a wage equivalent to $25,000 a year for full-time work.

Walmart and its defenders like to argue that raising wages would require it to raise prices, which would in turn hurt its low-income shoppers. But Demos disagrees: “Curtailing share buybacks would not harm the company’s retail competitiveness or raise prices for consumers,” the report says. “In fact…higher pay could be expected to improve employee productivity and morale while reducing Walmart’s expenses related to employee turnover.”

A spokesperson for Walmart did not immediately respond to a request for comment.