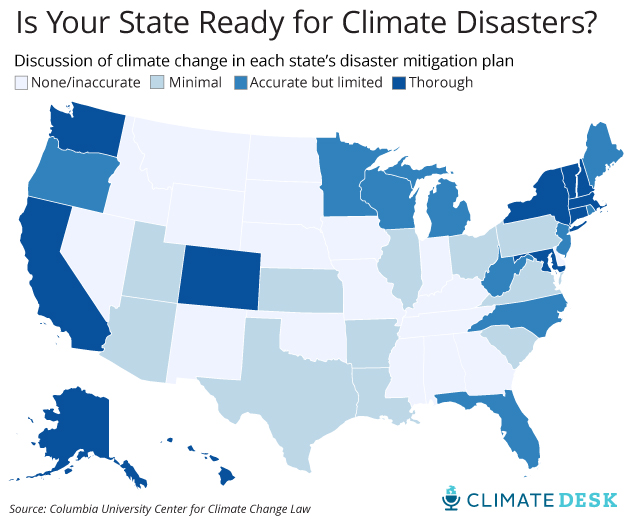 Whether it’s wildfires in the West, drought in the Midwest, or sea level rise on the Eastern seaboard, chances are good your state is in for its own breed of climate-related disasters. Every state is required to file a State Hazard Mitigation Plan with FEMA, which lays out risks for that state and its protocols for handling catastrophe. But as a new analysis from Columbia University’s Center for Climate Change Law reveals, many states’ plans do not take climate change into account.

Michael Gerrard, the Center’s director, said his team combed through all 50 reports to see how accurately and comprehensively climate change was taken into consideration, if at all, and grouped them into four ranked categories:

While FEMA itself acknowledged this summer that climate change could increase areas at risk from flooding by 45 percent overt the next century, states are not required to discuss climate change in their mitigation plans. The Columbia analysis didn’t take into account climate planning outside the scope of the mitigation plans, like state-level greenhouse gas limits or renewable energy incentives. And as my colleague Kate Sheppard reported, some government officials have avoided using climate science terminology even in plans that implicitly address climate risks; states that didn’t use terms like “climate change” and “global warming” in their mitigation plans were docked points in Columbia’s ranking algorithm.

Gerrard said he wasn’t surprised to find more attention paid to climate change in coastal states like Alaska and New York that are closest to the front lines. But he was surprised to find that a plurality of states landed in the least-prepared category, suggesting a need, he said, for better communication of non-coastal risks like drought and heat waves.

“We had hoped that more of the states would have dealt with [climate change] in a more forthright way,” he said.