When I think of Nelson Mandela, I don’t really think of Mandela the president. I think of Mandiba the political prisoner, and the man whose writing gave me courage behind bars. I read Mandela’s autobiography, A Long Walk to Freedom, while incarcerated as a political hostage in Iran. His life put mine into perspective. I was finishing my second year, but he spent nearly as many years in prison as I’d been alive. He negotiated the end of apartheid from his cell. He was forced to bust rocks day after day, year after year, with a hammer for no good reason. He said the time he’d spent in solitary confinement were the most difficult thing he’d ever been through. I had made it through four months of solitary. If Mandela said that was the hardest thing, I could trust that the worst was behind me. 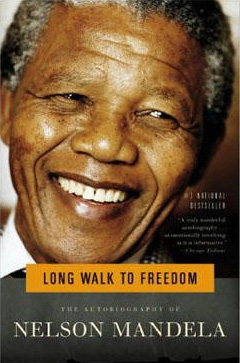 In our limited, isolated world, Mandela’s experience became a reference point. When I read about the garden he eventually planted on Robben Island, my cellmate Josh Fattal and I made our concrete cell a little more alive by planting an onion in a milk carton, and setting it in our windowsill. When interrogators were unusually nice to us, we thought maybe it was a sign that freedom was coming: Mandela was treated better before he was released.

Mandela wrote much of his autobiography on pages that a fellow prisoner later transcribed into microscopic text. Those notes were then stuffed into the spines of a book, and smuggled out. After reading that, I taught myself how to write so small it could hardly be read, and Josh and I slipped our words into the spines of our books.

Six months after getting out of prison, we got our books back. There were hundreds of them. The Iranians handed them over to the Swiss embassy and the Swiss shipped them to DC. All of the book spines were sliced open and our notes were gone. But we got that autobiography. It sits prominently on our bookshelf at home. Mandela is a hero for ending apartheid. But he is also a hero for making it through those 27 years unbroken.