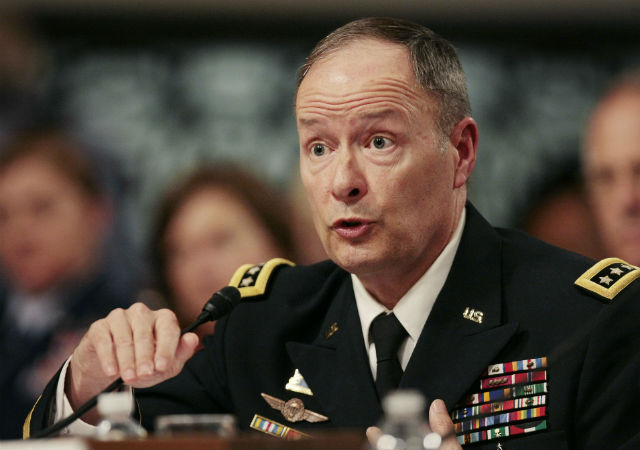 US Army General Keith Alexander, the director of the National Security Agency.Fang Zhe/Xinhua/ZUMAPRESS.com

Last week, Sen. Bernie Sanders (I-Vt.) posed an intriguing—and potentially damaging—question to the embattled National Security Agency: “Has the NSA spied, or is the NSA currently spying, on members of Congress or other American elected officials?”

Sanders, in his letter to the NSA, defined spying as collecting lawmakers’ phone metadata (information on phone numbers called, where calls are made to and from, how long the call lasts), information about website and email traffic, and “any other data from a third party not made available to the general public in the regular course of business.” As the documents leaked by former NSA contractor Edward Snowden have revealed, the NSA has hoovered up personal information on just about everyone else on the planet—elected leaders of foreign countries, diplomats, allies and enemies overseas, and millions of American citizens. Although none of the Snowden documents published thus far mention NSA spying on American elected officials, it was only a matter of time before an angry member of Congress asked if Capitol Hill, too, had been a focus of the agency’s surveillance.

The NSA quickly responded to Sanders’ letter, and as the Guardian reports, it includes no denial of spying on members of Congress. Here’s the statement:

NSA’s authorities to collect signals intelligence data include procedures that protect the privacy of US persons. Such protections are built into and cut across the entire process. Members of Congress have the same privacy protections as all US persons. NSA is fully committed to transparency with Congress. Our interaction with Congress has been extensive both before and since the media disclosures began last June.

We are reviewing Senator Sanders’s letter now, and we will continue to work to ensure that all members of Congress, including Senator Sanders, have information about NSA’s mission, authorities, and programs to fully inform the discharge of their duties.”

In other words, we treat members of Congress like all other American citizens. Whom the NSA spies on by collecting vast stores of metadata on phone calls and other communications. A fact that James Clapper, the top intelligence official in Obama’s cabinet, lied about under oath before Congress last year.

Based on the NSA’s statement, the agency apepars to be preparing a fuller response to Sanders’ letter. Perhaps that might put to rest any worries about domestic spying on our nation’s most powerful lawmakers. If it doesn’t, and if concerns about spying on Congress fester, we might see the House or Senate haul Gen. Keith Alexander, the director of the NSA, back to Capitol Hill to testify. That’ll make for exciting daytime television.