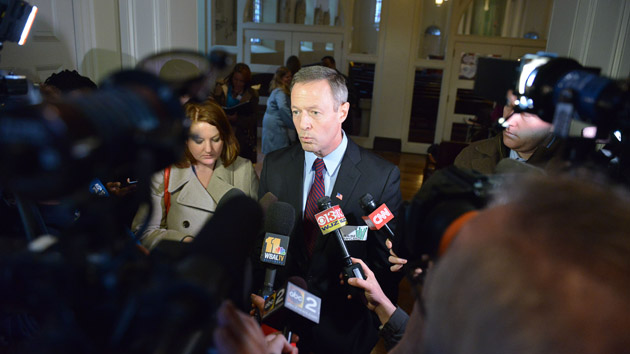 While Hillary Clinton, the presumptive Democratic nominee in the 2016 presidential contest, has made headlines lately for the big-money-fueled super-PACs lining up in her corner, another potential Democratic contender, Maryland Gov. Martin O’Malley, is embracing the other end of the political money spectrum.

O’Malley, who would likely run to the left of Clinton in 2016, says he supports the Government By The People Act, a new bill recently introduced by Maryland Congressman John Sarbanes intended to increase the number of small-dollar donors in congressional elections and nudge federal candidates to court those $50 and $100 givers instead of wealthier people who can easily cut $2,500 checks. The nuts and bolts of the Government By The People Act are nothing new: To encourage political giving, Americans get a $25 tax credit for the primary season and another $25 credit for the general election. And on the candidate side, every dollar of donations up to $150 will be matched with six dollars of public money, in effect “supersizing” small donations. (Participating candidates must agree to a $1,000 cap on all contributions to get that 6-to-1 match.) In other words, the Sarbanes bill wants federal campaigns funded by more people giving smaller amounts instead of fewer people maxing out.

What makes the Sarbanes bill stand out is breadth of support it enjoys. The bill has 130 cosponsors—all Democrats with the exception of Rep. Walter Jones (R-N.C.)—including Sarbanes and House Minority Leader Nancy Pelosi (D-Calif.) And practically every progressive group under the sun has stumped for the Government By The People Act, including the Communication Workers of America, the Teamsters, Sierra Club, NAACP, Working Families, Friends of Democracy super-PAC, and more. Through efforts like the Democracy Initiative and the Fund for the Republic, progressives are mobilizing around the issue of money in politics, and their championing of Sarbanes’ bill is a case in point.

But O’Malley is the first 2016 hopeful to stump for the reforms outlined in the Government By The People Act. “We need more action and smarter solutions to improve our nation’s campaign finance system, and I commend Congressmen John Sarbanes and Chris Van Hollen for their leadership on this important issue,” O’Malley said in a statement. “Elections are the foundation of a successful democracy and these ideas will put us one step closer toward a better, more representative system that reflects the American values we share.”

No other Democratic headliners, including Clinton, have taken a position on the Sarbanes bill. (New York Gov. Andrew Cuomo did include a statewide public financing program in his latest budget proposal. And Clinton, as a senator, cosponsored the Kerry-Wellstone Clean Elections Act.) Yet with nearly every major liberal group rallying around the money-in-politics issue, any Democrat angling for the White House in 2016 will need to speak up on how he or she will reform today’s big-money political system.